Samsung UK gives free Galaxy S to reception-plagued iPhone 4 users, I could use one too

There is no doubt Samsung Galaxy S is one of the most threatening competitors against the iPhone 4. It seems Samsung won’t stop with the nagging ads, but will step even further – give away a free Galaxy S to unsatisfied iPhone 4 users. Beat that, Apple! 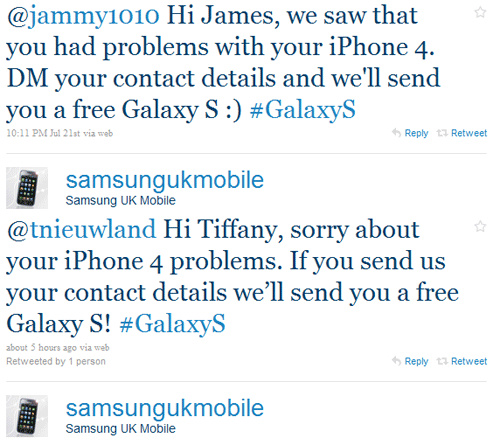 Samsung UK offered free Galaxy S to a few angry iPhone 4 users on Twitter. Those people posted some complaints about the reception issues and later received a message to send their details and receive a free Galaxy S. This comes directly from the official Samsung UK Twitter account. Nice, eh?

I got my iPhone 4 a few hours ago and the first call I made dropped due to my natural handgrip. I’m certainly not surprised but really – the first one?! And it happened in an area with some perfect network coverage. A further inspection on the “death spot” shows all bars dropped to one, just by touching it on that special spot.

So if anybody tells you there are no reception issues, take it with a pinch of salt. And if Samsung wants to give you a Galaxy S because of your iPhone 4 problems – take it too and spread the word about it. I know I would.