The Samsung Tab Android tablet has appeared several times before, but this has to be the most detailed leak yet. The guys over at ifanr.com received the juicy info from a tipster who passed along photos and impressions that confirm a lot of the specs we’ve heard so far… 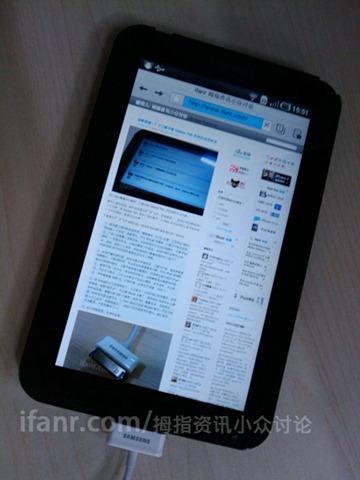 The Samsung P1000 Tab sports a 7” AMOLED touchscreen with 1024 x 600 pixels resolution. It’s running Android 2.2 Froyo (OS version is visible in the photos) using the PowerVR SGX540 graphics chipset (the same as on the Samsung I9000 Galaxy S).

Other specs that the tipster managed to corroborate are the Wi-Fi 802.11n support, GPS, 3.2MP camera on the back and a secondary front-facing QVGA one and 3G network connectivity. There’s also a reportedly very good eBook reading app, which means the Samsung Tab will be competing with the iPad on that front too.

As for the hardware aspects of the Tab, the tipster reports that it’s plasticy and thicker than the Dell Streak (not surprisingly, the Dell Streak is only 10mm thick). The photos also show a data/charging port and cable that looks remarkably similar to the proprietary plug used by Apple for all iPods/iPhones/iPads.

Price and release date information is still unavailable and Samsung have yet to officially confirm the specs, so take these ones with a pinch of salt. The official announcement however is expected this September at the IFA consumer electronics show, which will be held on 3-8 September in Berlin.