After our meeting with the Samsung Gear Fit at the Mobile World Congress, we were left wanting for more so when we got it at the office we spent a lot of time with the device on wrist to test its many fitness and smartphone companion features in full. 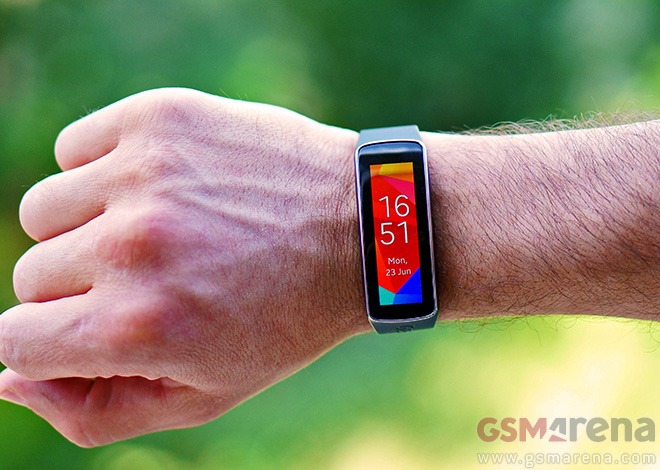 The Samsung Gear Fit is the third smartwatch to come out of this year’s Gear generation but isn’t quite as functional as the Gear 2 and Neo. It it is closer to the fitness band market than to the fully functional smartwatches. For starters the Fit lacks a microphone and speaker so you won’t be able to take calls on it like you would on the other Gears. There’s no speaker too. What there is – a curved 1.84″ Super AMOLED screen that’s simply gorgeous and more intuitive to use.

The rest of the specs include Bluetooth 4 low energy that will keep you constantly connected to your Samsung smartphone or tablet and its Gear Fit Manager app without drawing much power. Samsung has included Fit support for a total of 17 devices which means non-Samsung users are left in the dry with the Gear Fit – not nice.

Unlike the Gear 2, Gear 2 Neo and recently the original Gear the Gear Fit doesn’t run on Tizen but instead on RTOS (real-time operating system) meaning there are no third party apps available and you’re pretty much stuck with the built-in functionality for now.

The Gear Fit retails for about $200 which puts it in direct competition with both fitness bands and smartwatches so it’s even more interesting to see where this bold hybrid of a product fits, get it.

The Samsung Gear Fit is basically a two part thing. You have the main body which holds the curved Super AMOLED touchscreen, the power button on the right side and on the bottom of it the charging pins and optical heart rate sensor. The second part is a detachable rubber band that holds the Gear Fit onto your wrist. The wristband is changeable so you can get any of the available six colors as an addition to the Gear Fit and we expect more wristbands to hit from third party providers.

The front is reserved for the brilliant 1.84″ Super AMOLED touch-enabled screen. With a resolution of 432 x 128 at this diagonal the Gear Fit is good for around 244 ppi. That’s not technically retina territory but we don’t expect you’ll be looking at the screen from too close up. The screen can be set to either portrait or landscape view and you can choose on which wrist you’re going to wear it. We found portrait a little more comfortable but that’s a personal call.

The display looks great and offers superb contrast, colors and blacks. The only gripe we have with it are the bezels and software – the Gear Fit lacks an ambient light sensor so you’ll need to manually choose a brightness. Outdoor mode is the brightest mode, but you should keep in mind that the Gear Fit will eventually revert back to the default 4 (out of 6, the last being Outdoor mode) brightness level, which won’t do on the outside.

Aside from the charging accessory the Gear Fit comes with an A/C adapter in its rather big retail box.

We like how the Gear Fit fits on the hand. Thanks to its curved front it’s very comfortable to use and navigate and Samsung has given users enough flexibility for using the smartwatch. The strap attaches securely to the hand and the Gear Fit is small enough to not be a hassle whether you’re sleeping, running on just walking.

At just 27g the Gear Fit is very light but don’t go thinking for a second that it’s brittle. Sharing the IP67 certification of the Samsung Galaxy S5, the Gear 2 and Gear Neo, the Gear Fit will withstand dust completely and do with a little water – up to a meter deep for as long as 30 minutes.

We easily got 4 to 5 days of solid Gear Fit use with a lower brightness setting and around 3 days with the maximum allowed brightness – quite enough so charging won’t be too big a deal.

In order to get the full experience out of the Gear Fit Samsung has included a separate app for it – Gear Fit Manager. It will allow you to connect your Samsung device to the Gear Fit, change the clockface, the wallpaper and the app layout. 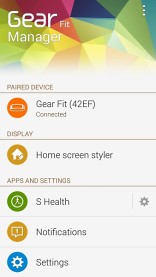 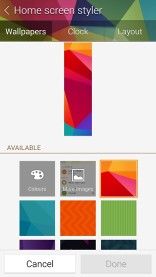 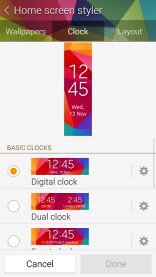 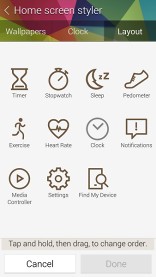 You can manage which notifications will reach the Gear Fit. As you can’t take calls on the smartwatch you’ll at least be notified when they come and you can reject it or deny it with an SMS (those need to be pre-filled from you smartphone).

Text notifications, such as email or SMS, will reach the Gear Fit and are readable but as its screen is long and narrow the Gear Fit will display a few scrollable lines of text. As that would mean the use of both your hands we’d just recommend taking out your smartphone and doing things the old fashioned, and much better, way.

The Gear Fit Manager is instructed to download the fitness readings from the Samsung Gear Fit every couple of hours so they’ll be right there in S Health when you open up the app. 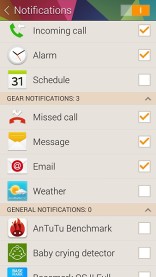 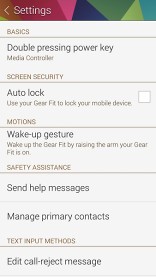 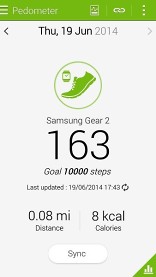 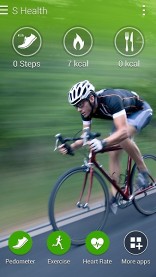 The Gear Fit itself will display a couple of things on the lockscreen – you get the clock and date by default but you can also add a steps counter.

The homescreen snuggles three apps per screen but you can quickly navigate using the touchscreen. You can assign the home button to open up the recent apps or any of your favorite apps upon double tap.

Once you leave the area of connection to your smartphone the watch vibrates, which is really intuitive and practically eliminates the possibility of accidentally losing your phone.

You can also control the multimedia loaded on your smartphone. As the Samsung Gear Fit doesn’t have built in storage you can’t connect it to a Bluetooth headset and enjoy music without a smartphone like on the Gear 2.

The fitness apps are the same as on the bigger Gear 2 duo. You get a standalone Pedometer and an exercising app with walking, running, cycling and hiking preloaded as fitness options. You can set a training session for each activity and assign goals to yourself. The Gear Fit will even give you simple instructions such as to slow down or speed up.

As the Gear Fit lacks a GPS it can only rely on gyroscope and accelerometer information to cover your steps and distance. In our tests we measured it wasn’t too accurate with distance and calculated more steps than made in reality – not by much but still a factor.

You can also track your heart rate during training but the feature is off by default and works slow – you’ll need to hold still until the Gear Fit gets a reading of your heart and only then continue with your workout.

You can also monitor sleep. Once you set the Gear Fit into sleep mode it will automatically enable Blocking Mode (Samsung’s notification-stopping do not disturb mode) and disable the auto-on gesture (flicking your wrist), preventing it from lighting up when you accidentally move your wrist in sleep.

The bad thing about the Gear Fit’s software is that nothing is automatic and you’ll need to constantly tell the smartwatch that you’re going for a walk, or going for a run, or going to sleep. That’s hardly the most ideal way of having your physical activities monitored and turns the smartwatch into somewhat of a burden instead of a fun, easy to use accessory.

The same goes for the other two smartwatches in this year’s Gear lineup and that’s something Samsung could, potentially, address in a software update. Let’s hope so, otherwise you’d be left wanting from a device that costs more than its rivals that do either the smartwatch thing better or the fitness smartband thing better.

We liked the Samsung Gear Fit the moment we opened the box for the first time. It looks sleek and different – most of its peers have screens that can’t hold a candle to the Fit’s superb Super AMOLED. Another thing that makes this renegade lovable is the design – swappable straps and a very small, portable watch body – it’s great.

But the execution lacks creativity. The Gear Fit aims to mash a smartwatch with a smartband and do everything in between the best it can. It’s an okay companion to your smartphone and an okay fitness band but for the asking price you’re more than allowed to frown at the okay part, wishing it replaced with superb or at least very good.

Being a mix of two segments the Gear Fit can also fall prey to a big list of rivals. The Jawbone Up24, Polar Loop and Fitbit Flex all spring to mind and all cost lower than $150 – all of them better equipped to track your fitness activities. The Pebble watches have the upper hand in the app ecosystem and will cost less for the original and a little more for Steel variant – both looking notably inferior to the Fit, though.

Then there’s the Gear 2 Neo, which has a proper OS behind it that allows third party apps, has an IR for remote control and easily looks more mature. It’s probably the Samsung smartwatch to offer the best value for money at this point and it’s probably the one you should be looking at if you are to spend $200.

The Samsung Gear Fit is a great conversation starter for sure and does what it offers okay. But it’s shortcomings at the time of writing outweigh the rest.