Samsung Galaxy Ace S5830 comes to the office, a hands-on video awaits you inside

It’s been a while since the last Samsung mid-range Android handset. The company looked too busy with its Galaxy S and we almost lost hope that we’ll see a Galaxy Spica successor. Yet here comes the Samsung Galaxy Ace S5830 and we are rushing to give you a hands-on video and a few photos. 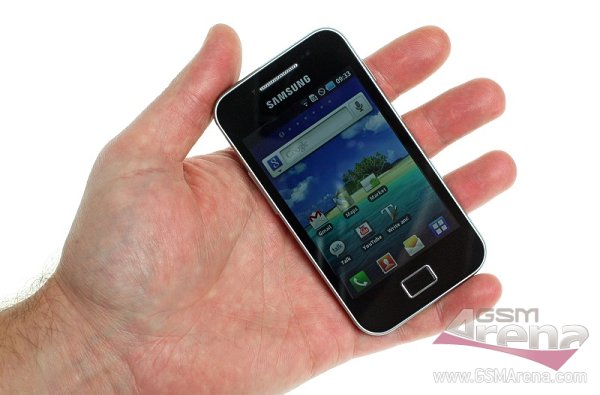 The Samsung Galaxy Ace S5830 front side bears distinct resemblance to the Apple iPhone 4, while its back looks like a mini Galaxy Tab (the one in white). Another difference we noticed is that our pre-production black unit has a shiny back, while the official photos suggest that the back of the Galaxy Ace is opaque, rather than glossy and has some texture on it.

We are pretty pleased with the Froyo-running smartphone in terms of performance. It’s obviously an early prototype and some bugs and freezes are to be expected, but the general menu navigation and app performance is quite good.

We’ll be able to tell you more about the Galaxy Ace S5830 when the preview is completed. Now enjoy the hands-on video and feel free to share any impressions you might have of the handset in the comment section below.