Retro technology: terabyte storage on magnetic tape and a paper map that zooms

Some of you might remember the times when programs were loaded from a cassette tape, but with 32GB microSD cards just around the corner, you never thought you’d use magnetic tape again, did you? You probably thought you were done with paper maps as well. Not so fast – a new tape from IBM can store terabytes of data and a new paper map can zoom…

Researchers from IBM and FUJIFILM are breathing new life into the age-old technology of storing data on magnetic tapes. A single reel of their super-tape can fit 35TB of data – yes, terabytes. Forget flash cards, even hard disks (another aging technology that just won’t go away) can’t do that.

Can you imagine the next generation media players? They’ll probably look a lot like this: 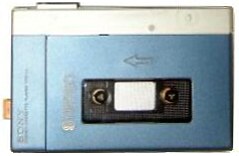 Just wait till someone figures out how to play a vinyl record with lasers. Oh, wait. It’s already been done

Paper maps have been around for a long, long time but they suffer a few disadvantages when compared to their digital equivalents – not the least of which is lack of zoom. Sure, you could use a magnifying glass to make things look bigger, but you won’t get any more detail that way.

The zoomable Map2. Map3 will probably have satellite view or street view

Enter the Map2 – a zoomable paper mapr of London. You just unfold one of quadrants of the map is divided and you get a zoomed in view of that part of the city. Yep, the zooming feature here is achieved by the clever way the map was folded, here are the instructions (or check out this video):

So, no pinch zooming I guess