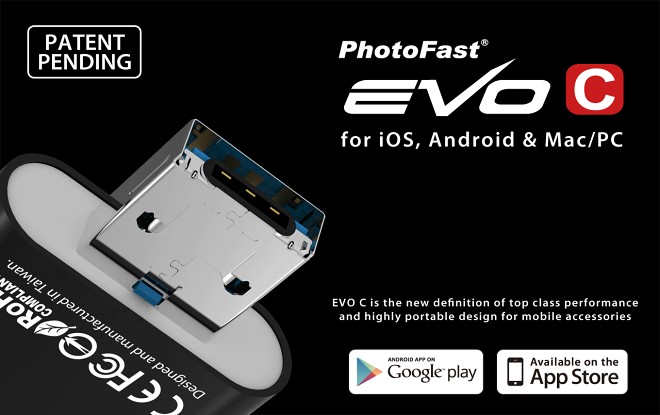 The flash drive in question is essentially meant to be used with iOS devices, through the lightning port on one side, as well as more conventional USB hosts, like PCs, thanks to the type A connector on the other end. Upon first inspection, there is nothing really special about the device, but a closer inspection reveals, that the traditional USB houses the much smaller, reversible type C connector. It is concealed in the bottom plastic part of the type A connector and slides out when needed.

This unique design allows the PhotoFast EVO C to be compatible with Apple’s new MacBook, as well as any future USB type C-enabled tech, while still offering backward compatibility with more traditional USB devices. Thanks to the new standard, the flash drive can reach transfer speeds of up to 5-Gigabits per second.

On the iPhone side, the flash drive relies on the i-FlashDrive One app, which provides various backup and transfer functionality, all wrapped-up In a nice GUI. As far as pricing goes, well let’s just say, they’re not exactly giving them away. The cheapest 8GB variant will retail for $79.95 and there are also variants all the way up to 64GB and prices grow accordingly:

A 128 GB version is currently in the works, but there is no expected release date yet.