Ah, it’s good to see the overclocker spirit is not dead yet. Though the Palm Pre is an unlikely target. Still, ramping it up to 800MHz sounds like a hefty boost… 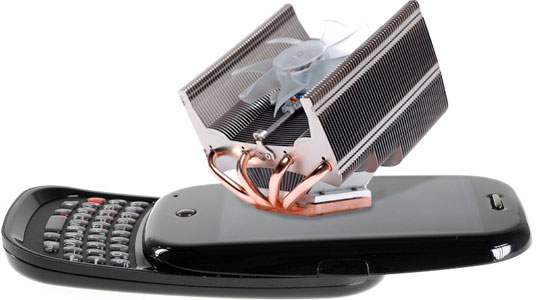 Here’s the deal – there are two distinct patches that can be used to overclock the Palm Pre. The first is OS independent, while the second is specific to the 1.3.5.1 version of WebOS (a version for v1.4 is coming too).

The first patch has two options – set the CPU clock at 550MHz or at 600MHz and there’s a third patch that undoes the changes. Apparently, the CPU in the Palm Pre is rated at 600MHz but is downclocked at 500MHz.

The second patch pushes the CPU past its rating – it has two versions too, one at 720MHz and the other goes all the way up to 800MHz. You need to be very careful with this one, even mismatched OS versions can brick your Pre. This one can be undone as well.

Here’s a video of the Palm Pre running at 800MHz. It looks snappy, but without CPU benchmarks (e.g. some game that shows the frame rate) it’s hard to tell if it’s worth the extra heat and the shorter battery life:

Both patches are surrounded with warnings that this may lead to overheating, reducing the CPU lifetime and the occasional freezing, so there’s of course some risk involved. Go on your own risk.