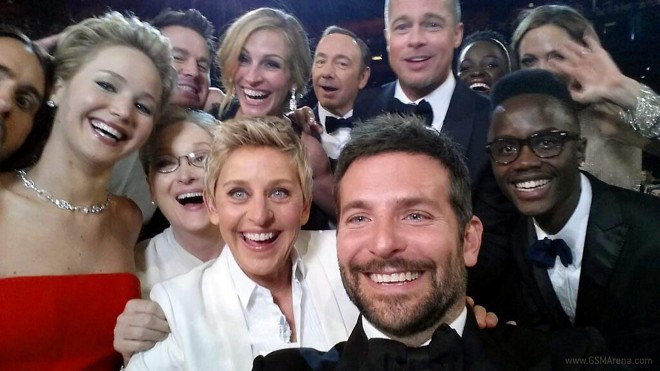 With it emerged reports of Samsung having paid handsomely for the spot, which the company is now saying was not the case, and that the celebrity chose the Samsung smartphone “organically.”

The selfie, which turned out to be the most re-Tweeted post in Twitter’s history, has had no shortage of companies trying to cash in on the hype it has generated, including LG:

If only Ellen had a G2 she would've taken this selfie her self #Oscars #TheEllenShow #LGG2 #selfie pic.twitter.com/6j9hhnwU4m

While Samsung would very much like to make everyone think the device was chosen spontaneously by DeGeneres, The Wall Street Journal claims otherwise:

“While the stunt felt spontaneous, it wasn’t entirely unplanned. As part of its sponsorship and ad pact for the Oscars with ABC, the TV network airing the show, Samsung and its media buying firm Starcom MediaVest negotiated to have its Galaxy smartphone integrated into the show, according to two people familiar with the matter. ABC is a unit of Walt Disney Co. Samsung gave ABC smartphones to use during the broadcast and was promised its devices would get airtime, these people said. At least one of the product plugs was planned: during the “red carpet” preshow, ABC ran a clip of six aspiring young filmmakers touring Disney Studios. The group were seen in the video using Samsung devices.”

In response, Samsung doesn’t deny that it is a commercial partner of ABC networks, but urges that the Note 3 was “organically” chosen as the preferred device with which to take the photo:

While we were a sponsor of the Oscars and had an integration with ABC, we were delighted to see Ellen organically incorporate the device into the selfie moment that had everyone talking. A great surprise for everyone, she captured something that nobody expected. In honor of this epic moment and of course, the incredible response of nearly 3 million re tweets, we wanted to make a donation to Ellen’s charities of choice: St Jude’s and the Humane Society. Samsung will donate 1.5 million dollars to each charity.

Sponsored or not, the Oscar for Best Promo of the Year certainly goes to Samsung.