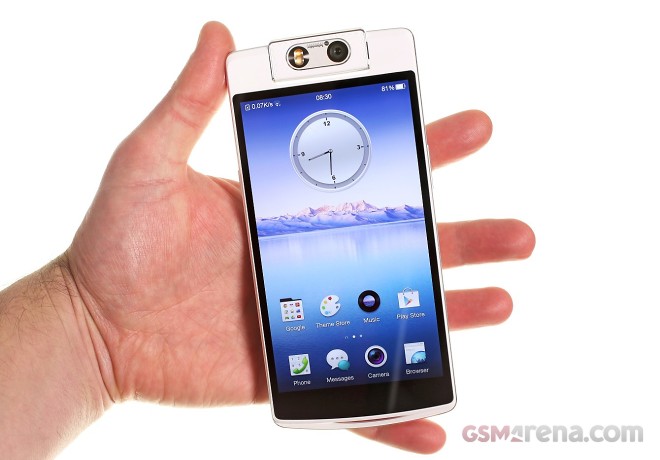 Last year Oppo N1 broke a mould or two by introducing a pivoting 13 MP camera lens – the first ever on a mobile phone. Not only that, but it also had a huge 5.9″ 1080p IPS LCD and users had a choice of either Oppo’s Color OS or a tailor-made CyanogenMod OS based on stock Android. That certainly set the bar high of follow-up.

The Oppo N3 has gotten smaller without becoming small – the phone is 9.5mm shorter, 5.6mm narrower, 21g lighter and just 0.9mm thicker than the Oppo N1. The screen isn’t as huge at 5.5″ but the resolution stretches to a nicer 403 ppi compared to the less sharp 373 of old.

The main event here is the rotating lens – it is now motorized and can move by itself. You can move it by dragging a finger on-screen in the camera app or you can prompt it to do a complete 206-degree spin with a quick swipe on screen.

The camera software will even move the rotating lens smoothly through a full 206-degree panorama on its own.

Oppo’s proprietary O-Click remote can activate the camera app with a long press and be used to slowly rotate the lens thanks to a built-in d-pad.

The camera is another improvement. The resolution has gotten higher at 16MP, the sensor is big for a smartphone at 1/2.3″ and the lens is certified by Schneiner Kreuznach.

Oppo has retained the design aesthetic of its phablet. The phone is a mix of premium polycarbonate and precision cut steel frame which runs long the body. The frame creates an arc toward the bottom with a thin cutout where the LED lies – Oppo calls it Skyline Notification 2.0.

We still haven;t heard anything about a CyanogenMod edition for the Oppo N3 and the device comes running Color OS 2.0 based on Android 4.4.4 KitKat.

Oppo has left the traditional app drawer layout for Android and following the trends in China, now offers an iOS-esque. There’s no app drawer, the task switcher looks very much like the one in Apple’s software.

Everything runs fluidly, though that’s expected with a Snapdragon 801 under the hood. Given the timing of the N3 release we wouldn’t have frowned at a Snapdragon 805 but that’s just nitpicking.

The Oppo N3 is made to look and feel great and it’s as quirky as it’s innovative. Among the many design ideas that give the N3 the look of a madman lie great advancements that might just prove to make it a genius. We’re already en route to seeing what all the motorized camera fuss is about, so stay tuned, our review is in the oven.