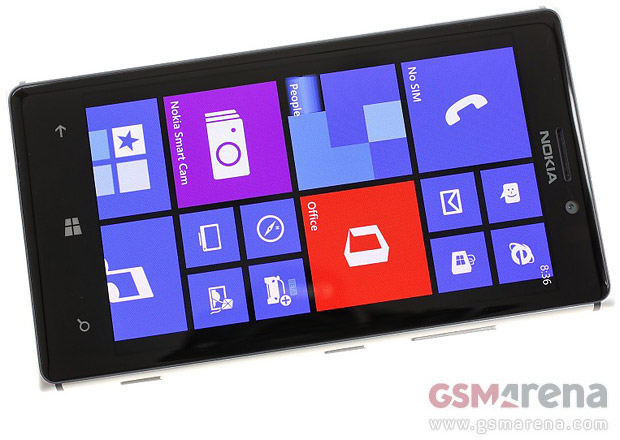 Just to be clear, the Lumia 920 didn’t need a redesign in terms of looks – it’s the thickness and especially weight that needed work. It weighed 185g, 2g heavier than the Samsung Galaxy Note II, which has a screen that’s a full inch bigger. Dropping to 8.5mm thickness from 10.7mm is a welcome change as well.

The Nokia Lumia 925 uses an aluminum frame for its sides, though its back is polycarbonate. Nokia has promised that there won’t be any death grip issues, which we’ll duly investigate later. Curiously, the 925 abandons the trademark bright colors of the rest of the Lumia line and goes monochromatic – the phone will be available in White, Grey or Black.

The decrease in thickness is partly due to the move to AMOLED. It’s 4.5″ big with WXGA (768 x 1280) resolution and a PenTile matrix. It is laminated to the Gorilla Glass 2 to reduce reflections and features ClearBlack tech. Also, it is highly sensitive and can detect touches with fingernails and gloves.

Nokia included a special tool in the settings to allow users to tweak the AMOLED displays – it lets you adjust color saturation and white balance to your liking. The screen also enables a clock to be displayed efficiently and you can wake the screen with a double tap.

The camera of the Nokia Lumia 925 also received some new goodies, though they are entirely in software. The phone still uses the 8.7MP image sensor with Carl Zeiss lens and Optical Image Stabilization.

The optically stabilized camera of the Nokia Lumia 925

The new software includes support for higher ISO modes (the maximum went from 800 to 3,200) and Nokia has improved the algorithms responsible for focusing, image and color processing in low-light shots.

The Smart Camera is a more apparent change – it’s an exclusive Camera Lens that features Scalado-based features like object removal, face selection, Action shot and Motion focus. It works by doing a burst of 10 photos at 5MP.

The lower resolution is a bit of a disappointment – Nokia’s special 8.7MP sensor is designed for optimal resolution in both 4:3 and 16:9 modes. In 16:9 mode (like Smart Camera uses), the sensor can deliver 7MP resolution. 5MP meanwhile is quite close to the 4MP of the HTC One, without the benefit of large pixels. Also, keep in mind that the camera features should arrive on older Lumia phones with the Amber update later on.

Anyway, Smart Camera can be launched as a Lens from the stock app or from its own shortcut. You can even set it as the default camera, the one that launches when you press and hold the camera shutter key. Photos can be automatically uploaded to SkyDrive or any other installed app that offers such functionality.

Check out Smart Camera, the lockscreen, the display color tool and more on video:

We’re working on a more extensive hands-on, with more details on the Nokia Lumia 925.