Nexus 4 gets a teardown

Now that the Nexus 4 has finally been released, it will go through the same motions as every other recent major device. There will be the drop tests, torture tests and the infamous “Will it blend?” tests later, but for now we have the iFixit teardown to kick things off. 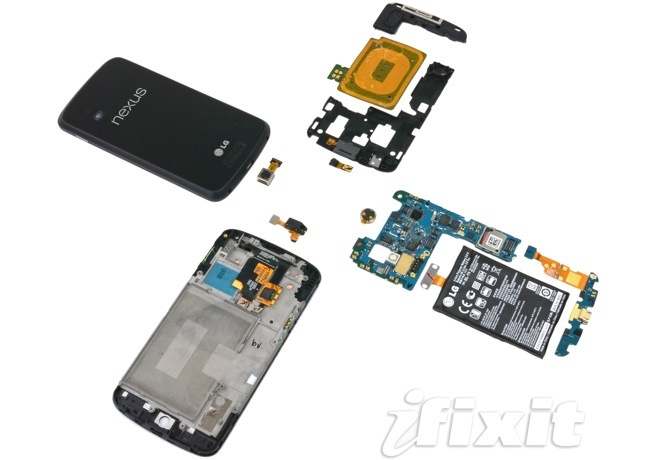 First things first, the Nexus 4 does not have a user-replaceable battery, which means the back cover requires more than just a push to come off. Once you get the Torx screws out, you have access to the insides of the device. Inside the cover are the NFC and wireless charging coils that connect to the device through golden contact points.

The battery is held together with a combination of screws and adhesive, which makes it much harder to remove than in most other Android phones. Than there is also the fact that it is not an off-the-shelf part, so you can’t do much if it goes bad other than hand over the device to the service station.

The rest of the teardown process is rather painless as everything else comes off fairly easily. We don’t really learn much that we don’t know already; most of the important parts such as the Qualcomm S4 processor are already known and there is no information on, for example, who manufacturers the camera assembly.

Update: Turns out the GSM model supports LTE connectivity but the functionality has been disabled.

Overall, the device gets a healthy repairability score of 7/10. You can check out the whole thing in the link below.