A top-secret snapshot has surfaced of an “Assistant” function on iOS 5, which has people hitting the speculation button that this could be the fruits of the Apple’s Siri buy last year and the work with Nuance’s text-to-speech technology. 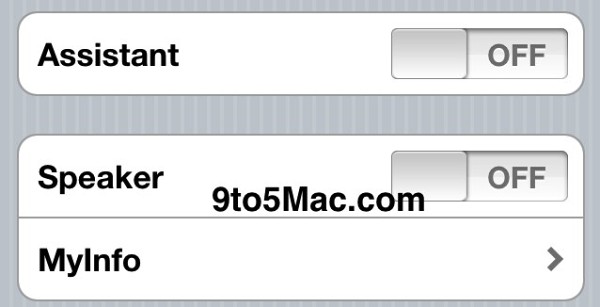 For those unfamiliar with Siri – it’s a voice-controlled assistant on the iPhone that can carry out cool orders like finding you a restaurant near your location, book tickets and more. So far it works via a dedicated app but this new screenshot could mean that we’re in for some deeper OS integration. The benefits of such an app built right into the OS is that apart from access to the internet it could get access to your contacts information and more, thus ending up being much more useful than a simple voice controller. Also such a feature could cut your physical texting in half by providing fluent voice-to-text conversion.

These are all strictly speculations so far, mind you, as currently none of the 4 released iOS 5 betas offer something of the sort. It could mean that Apple is preserving the cool new feature as an iPhone 5 (4s, etc.) exclusive.

9To5Mac have received this screenshot from a loyal ninja and they also show another one from an iOS SDK file, showing that the assistant will be speech related. The source that sent this in to 9To5Mac, however, shares the feature is still in developmental stages and could very well end up missing at the official launch of iOS 5 in September or it could even be tossed aside completely.

Finally, the “Assistant” feature will be crowd-sourced, which means that users will be given the chance to send feedback to Apple to improve the service and help get any dents out of it.

Just to entice your imagination a little bit – get a load of this video of the Siri app for the iPhone in action.

Here’s hoping we see this feature real soon along with the actual next-gen iPhone – best bet is September. I’m already getting tired of waiting.