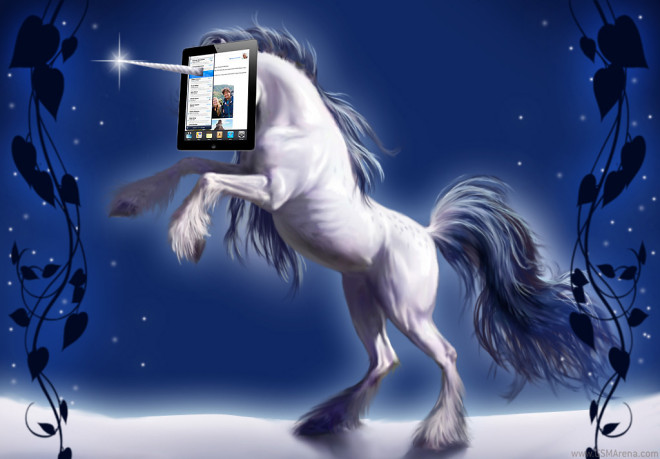 Now we’ll try and go through the rumors that came up most frequently on the web and see if the new Apple iPad actually matches the expectations or fails to deliver.

Retina display
This one was obviously spot on and is by far the biggest update brought by the new iPad. Okay, you might argue that a 264 ppi screen does not technically qualify as Retina, but that’s nitpicking, really. We can’t think of many real world scenarios, where you’ll be holding the iPad 10 inches away from your face, so the screen resolution is really as much as you are ever going to need (if not even more).

A6 chipset with quad-core CPU
This one went right down the drain – everyone was all but certain that the new iPad will come with a quad-core CPU, just like most of its Android market rivals did recently, but Apple chose to only upgrade the GPU instead. The two extra GPU cores will probably be just enough to make up for the extra resolution, so you shouldn’t expect a dramatic change in performance compared to the iPad 2 or the iPhone 4S.

No home button
We kinda liked the idea of an iPad without a homescreen button. The screen is big enough to fit all the buttons you need and it would probably make the whole UI simpler and more straightforward. Alas, it was not to be and the new iPad sticks to the tried and tested formula.

8 megapixel camera
This one came up partially true – the new iPad does represent a significant improvement over the one in terms of camera prowess, but its shooter does 5 megapixel, rather than 8 megapixel stills. We don’t think anyone will argue that this would have made any difference on a slate, though.

Thicker and heavier
Unfortunately, this one came out true – the new iPad has gained 55g of weight and 0.6mm of thickness compared to its iPad 2 predecessor. That’s the price you need to pay for getting the same battery life on a slate with four times the pixel count and LTE connectivity. Mentioning which…

LTE connectivity
That’s another particularly exciting bit about the new Apple iPad. Web browsing is bound to be its element with a large ultra high-res screen and it would only make sense for you to have the fastest network data transfers to make full use of it.

Siri
It seemed inevitable that Siri will be available on the new iPad, but that turned out not to be the case. Given that it uses the same version of the platform and a newer chipset, it’s rather puzzling why Apple chose to leave it out and only include the voice dictation option. Not that we are too disappointed – the whole talking to your smart devices thingy seems a bit awkward to us, but we are a bit confused nonetheless.

Obviously, we couldn’t get everything we wished for, but the new Apple iPad still feels like a pretty solid update. Any existing iPad user will be tempted to upgrade and we bet many newcomers to the tablet world will put it on top of their shortlists.