Things are different on the mobile platform, however. When asked to name some Disney games on the mobile, names like ‘Where’s My Water?’, ‘Where’s My Perry?’ and ‘Temple Run: Oz’ spring to mind. Now the company has released a new game called Mittens for iOS. Let’s see how this one fares.

In Mittens, you play as Mittens the cat who is trying to win the heart of his female friend Mia. To do this, he must acquire the objects that Mia desires and it’s your job to help him out.

The gameplay basically involves directing Mittens from Point A to B, which is enough to complete the level. However, if you really want to enjoy the game, you will need to collect the three diamonds scattered around the level. 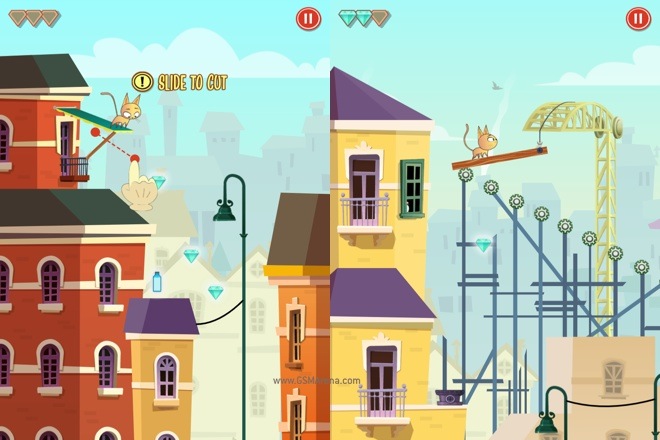 Now, you can’t move Mittens around directly but rather have to manipulate the environment around him. This involves cutting the wooden planks he’s sitting on, cutting ropes he’s hanging from, bouncing off wires and grabbing on to flying birds to move to the desired location, opening windows to bounce him off the wall, shooting him from a canon, etc. The game boasts over 30 of such mechanics and even though the game throws several of them at you at once it never feels overwhelming.

The initial levels, which includes most of the first level pack, are incredibly easy. It will hardly take you half an hour to blaze through all of them. The game then turns on the heat with the second pack. Timing, which was always necessary in this game, now becomes extremely crucial. Mistime a jump or a swipe and it’s instant game over. Soon levels start becoming increasingly complex and what started off as a cutesy game with kittens suddenly becomes serious business. The later levels had me playing them again and again, spending as much time on each of them as I spent on the entire first level pack, trying to get my timing right and collect all three diamonds (I always play for 100% completion). 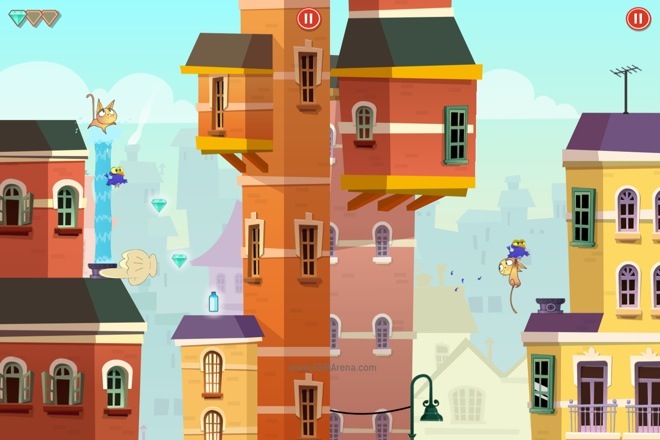 The game comes with three level packs by default, each of which has 30 levels with varying environments and mechanics in each pack. Out of the 30 levels, 25 are standard, with four being unlocked if you collect enough white diamonds in the first 25. If you collect the three red diamonds in each of these four levels, you unlock the extra difficult final level in the pack.

Along with the three level packs, there is also an optional fourth pack with 30 additional levels. Unfortunately, it is a paid extra and you will have to fork out another dollar for it. This is a bit unusual as in most paid games you get all the levels as part of the price, including future ones. Still, $1 is not that big a deal to pay for extra levels, especially if you enjoyed the game. 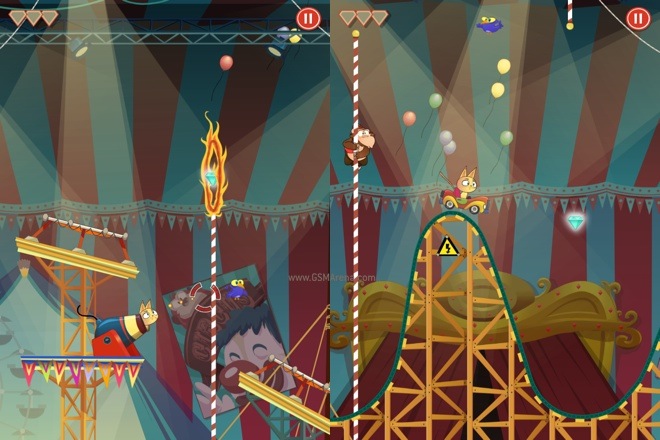 As mentioned before, the gameplay is quite challenging and requires a lot of precision. In some ways it reminds me of Cut The Rope, but there are a lot more mechanics at work here, in each level. Trying to remember how to activate each mechanic at the right moment is the trick here and with some practice you can get it right. Once you do get it right though, the game is quite enjoyable. Much more than you initially thought it would be based on the screenshots, intro video and the initial levels.

The visuals in Mittens have the classic Disney hand-drawn animation look to it, which is a refreshing change from the usual modern animation seen in most recent 2D games. The level design reminds one of old-school cartoons and the character animations, particularly for Mittens, are very well drawn and incredibly expressive. The visual style of the game is clearly targeted at children but if you look past the juvenile humor in the cutscenes then even as an adult you’d find the visuals enjoyable. 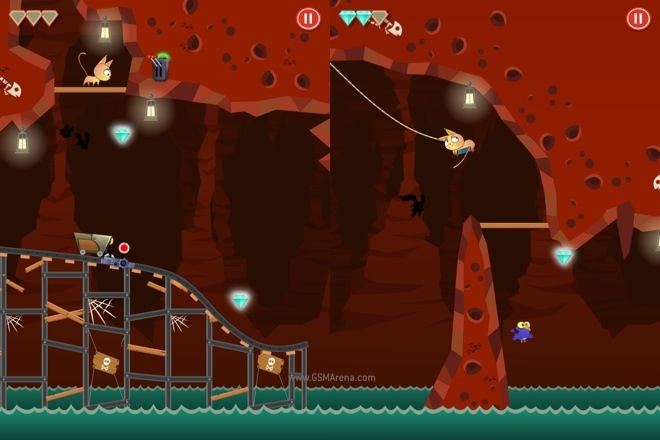 The sound in the game doesn’t stand out in particular. There is a theme music that runs when you start the game, which is okay, but then the actual game has no music. All you hear are some ambient sounds and the noises made by Mittens and one of the many objects scattered around the level. The sound effects are good, with the sound made by the birds being particularly amusing but again, nothing much to talk about here.

I’ll be honest, had it not won the Editor’s Choice honor on the App Store, I probably wouldn’t have ended up downloading Mittens, which as I know now, would have been a mistake. What I would have normally dismissed as a game for kids turned out to be a surprisingly challenging and enjoyable experience. Yes, the audio-visual style is still fairly puerile but not overly so and those willing to look beyond that will end up having a genuinely good time with this game.