Microsoft KIN One and Two could be coming back from the dead, to arrive at Verizon in Q4

The Microsoft KIN phones may have become zombies as they are apparently back from the dead – and into a leaked Verizon roadmap for Q4. The zombified KIN One and Two have lost their pricey data plan – maybe now they’ll be more competitive. Mind you, you’d be still buying a canceled product… 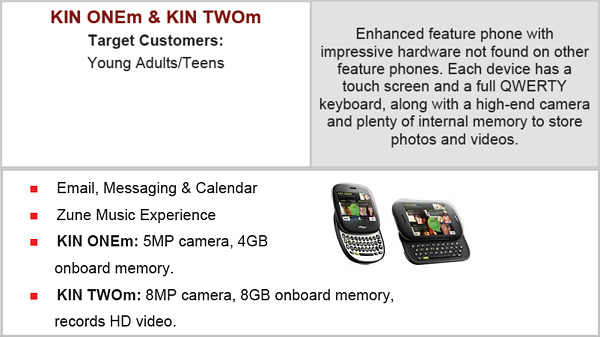 The Microsoft KIN phones survived a mere 48 days before they were pulled off the US market and they never reached Europe. Now they are making a comeback and while they’ve dropped the expensive contract, you can still stream Zune Pass music from Wi-Fi hotspots.

The leaked file does not list price for either KIN, but their specs are pretty impressive. The KIN One (“ONEm” in the roadmap) is a tiny portrait slider with hardware QWERTY, 5MP camera and 4GB of built in memory. The KIN Two (“TWOm”) on the other hand is a bigger side-slider with QWERTY and 8MP camera with 8GB built-in memory.

Both KINs are built on the NVIDIA Tegra platform running at 600MHz and the Microsoft KIN Two records 720p video. Before you go “that’s a great deal!” keep in mind that their custom OS is rather limited – no apps, no games, no calendar and not even IM.