iPhone 4 dashes ahead of the Nikon D90, becomes the most popular camera on Flickr

If you watched Apple’s latest keynote, you may remember Scott Forstall mentioning that the iPhone 4 is the second most popular camera on Flickr. Well, not any more. 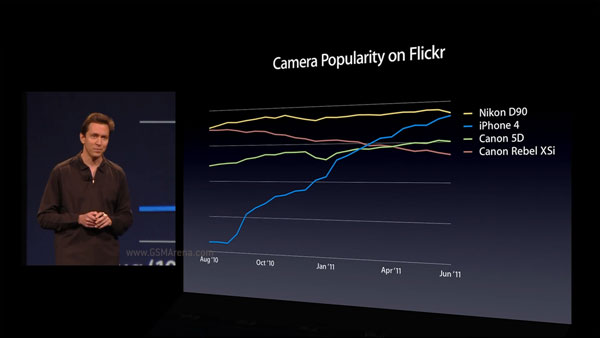 That’s because it has just beat the Nikon D90 in becoming the most popular camera on Flickr of all time. Camera, not camera phone.

As you can see below, the iPhone 4 is now leading, with Nikon D90 in the second position after leading for a long, long time and the Canon EOS 5D Mark II a distant third.

Looking at just the camera phones graph, the iPhone 4 is way ahead of the iPhone 3G, which still doing pretty well despite having a mediocre camera and being discontinued over a year ago and the iPhone 3GS is at third position. HTC Evo 4G is at number 4 position and is tied with, of all the devices out there, the iPod touch.

What this shows is that it’s not the camera quality that counts but how quick and easy a device makes the process of clicking a picture and uploading it. The iPhone 4 has a great camera, but there are other phones out there that take better pictures but you won’t see them here simply because it is a pain to upload pictures from them.

This also points out the fact that proper cameras are now loosing out to camera phones in terms of popularity. Sure, the professionals will still use them but for an average person, simply taking out a phone from his pocket, clicking a picture and uploading it on the Internet is easier than carrying a bigger camera, clicking the picture and then connecting it to a PC to upload it. While some may think this is bad, with the improvement in the image quality on camera phones, I don’t quite agree with them.