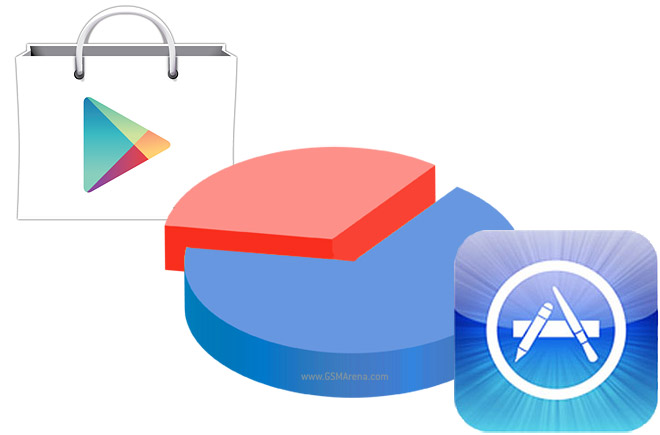 The analysts at App Annie have taken the two types of paid apps into account – premium apps (you pay for the app) and freemium apps (the app is free, but you can pay for in-game purchases). Freemium apps are the primary revenue generators on both platforms, showing incredible growth.

Meanwhile, revenues from such apps on Android have more than quadrupled worldwide since the beginning of this year, while premium app revenues have barely increased. Japan is showing big growths while the US seems to have stabilized, with focus shifting to freemium apps.

Those charts show indexed revenues with 100% set at the freemium app revenues for the first month that App Annie has data for on the given platform, which means they are not directly comparable.

However, an older infographic by them (humorously titled “Game of Phones”) shows that iOS is getting 71% of the combined revenues from apps compared to 29% for Android. This is calculated with data from April and the current combined iOS revenues are virtually identical to their April values, while combined Android revenues have nearly doubled.

You can check out Tech-thoughts, who have taken the time to go over reports from different analysts and estimate app revenues for both platforms.