Intel planning to bring Thunderbolt technology to PCs by April 2012

The Thunderbolt technology, developed by Intel in collaboration with Apple, has great potential but so far has been limited to Apple’s computers. Soon, however, that will not be the case. 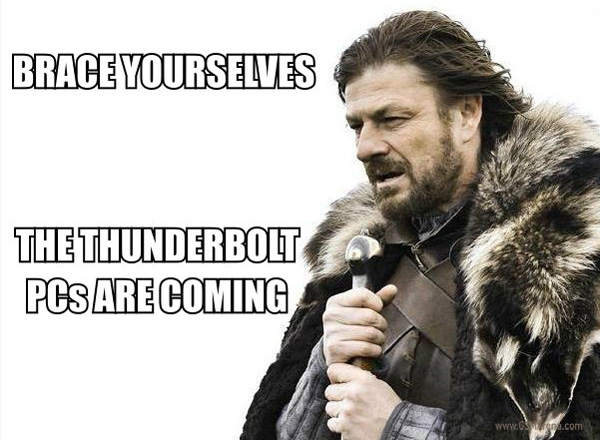 Digitimes is now reporting that Intel has notified its partners that the company will fully release the technology in April 2012, with several first-tier PC manufacturers already planning motherboards, notebook and desktop PCs to be released with Thunderbolt next year.

This is good news for the adoption of the technology. With more players coming in, we will see a higher number of devices that support this technology and also a reduction in prices for them.

In case you don’t know, Thunderbolt is the fastest I/O port available on consumer computers today, with a bandwidth of 10Gbps both ways, simultaneously and can supply up to 10W of power. With so much bandwidth and power being available through just one port, Thunderbolt allows you to easily daisy chain multiple compatible devices. Thunderbolt ports are capable of transferring data as well as high definition audio and video, all through one port. Being based on PCI Express, it is backward compatible with older interfaces such as USB and FireWire.

The current cost of Thunderbolt devices is quite high, with a 1TB LaCie Little Big Disk costing $499.95 and just the Thunderbolt cable itself costing $49. Hopefully, these prices will go down considerably next year.