HUEBRIX falls in the latter category. It’s a puzzle solving game for iOS and Android where you have to drag out paths and fill the shapes. Sounds simple, but it’s often the simple things that are the most enjoyable. We decided to find out if it that’s the case with this game.

In HUEBRIX you have to drag a stack of colored tiles across a grid of squares. The number of tiles in the stack dictate how further you can drag the stack, i.e., you can drag a stack of five tile upon five blocks. Your goal is to drag all the tiles across the entire grid and make sure every block gets covered by the colored tiles with no spare tiles left.

If that sounds complicated to you, watch the video below. I’d suggest not watching it entirely or else you’d spoil the solution for the puzzles for yourself.

You will comes across several other objects within the environment that determine how you spread the squares around. Certain squares are blocked, some can only be accessed by a stack of a particular color, some don’t let you progress beyond that point and some force you to move in one particular direction after you cross them. Some even add or subtract from the number of colored tiles you have. Sometimes, you can also go through one side of the environment and come out from the other. 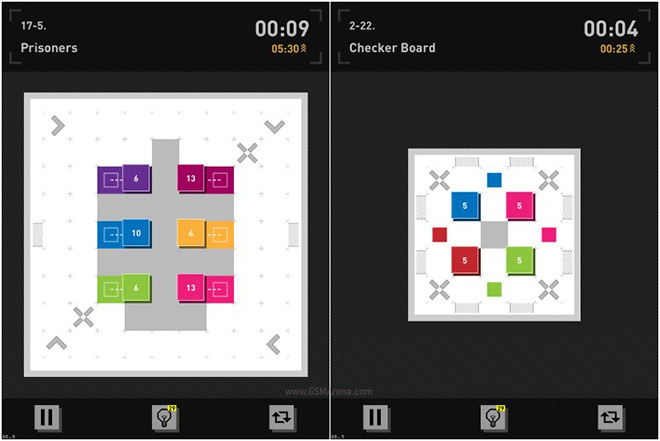 The basic premise of the game is very simple and you hardly need any instructions to play. The real fun is figuring out how you can fill out the squares using all the colors and this can be ridiculously challenging at times, even on the easier levels. Personally, I’m a fan of games that require you to rack your brain to complete the level instead of just mashing a button relentlessly until everything on the screen stops moving. HUEBRIX offers just the right amount of challenge that, even at its most intense, only makes you push on further instead of giving up. And the solution always seems simple once you find it, making you feel bit stupid for not thinking of it before. And if you’re really stuck, you can use one of the 20 available hints to make your progress a bit easier.

This is one area of the game where it differs from some of the previous puzzle games we have seen before on mobile, like Cut the Rope, for example, where new levels are added over time for free. I personally prefer this method, where you pay once and keep getting new levels as they are released for free and let’s face it, who wouldn’t? While what HUEBRIX does is not necessarily bad it does mean you get less bang for your buck. The 100 levels in the game are not much and you can go through them in a single afternoon. After that, spending the cost of an entire game ($0.99 right now) on a pack of 30, 20 or 10 levels (depending upon their difficulty) feels a bit much. While I won’t advise the developer to give away the levels for free, they could at least put in more by default or squeeze in more levels in the packs. 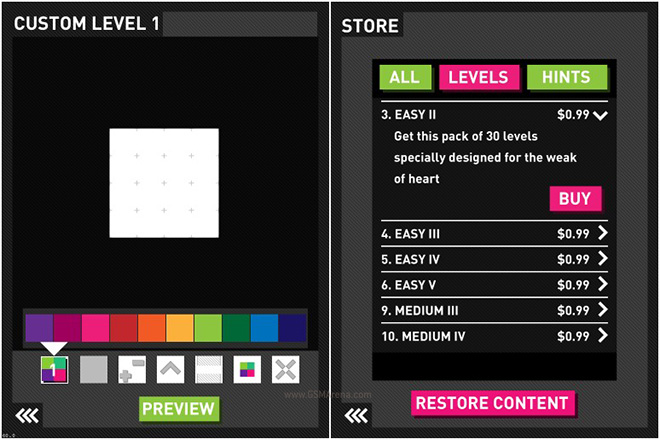 One last aspect of the game is that you can create custom levels using the level editor. You can then share these with people on GameCenter and download levels created by them. This feature is only available on iOS.

HUEBRIX is a basic 2D game but still manages to look stunning thanks to a bright color palette, particularly on high resolution displays. As usual, the game is best enjoyed on a tablet but even on the small display of a smartphone the game is quite enjoyable. 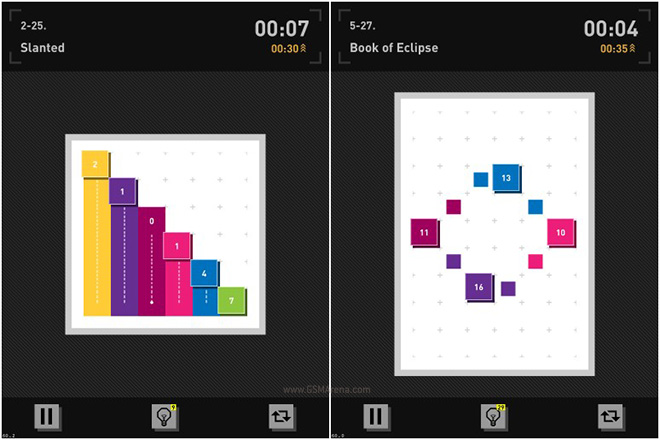 The sound is also quite nice. There is a single tune playing on a loop in the background but it’s soothing and goes well with the theme of the game.

HUEBRIX is a simple yet thoroughly enjoyable puzzle solving game that anyone with a smartphone or a tablet and some spare time on their hands can enjoy. It looks stunning and is filled with clever puzzles. Sure, the in-app purchasing system could be a bit more generous to the players but otherwise the game is perfect for anyone who enjoys solving puzzles.

(The game is on sale right now and selling for $0.99. Final price as of yet is unknown.)