HTC Sensation death grip testing revisited. Are there different versions of the Sensation?

HTC used the canned response “Every phone experiences a slight variation in signal strength when the antenna is covered in its entirety by a palm and/or fingers” when questioned about the death grip issues on the HTC Sensation. 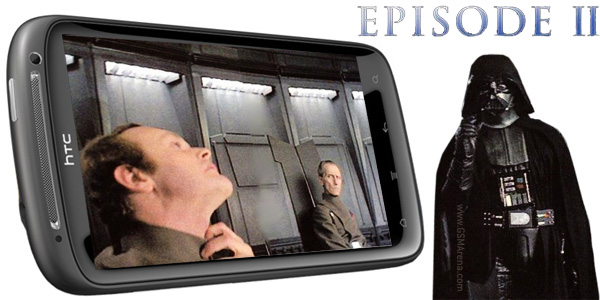 While that’s true, it says nothing about the severity of the problem – it could be a small signal drop for completely covering the phone, or a large drop for barely holding it. HTC also said the problem was exaggerated in our video, so we decided to record a new one.

For the purposes of demonstration, we kept the Sensation vertical as we tried to kill its reception in the first video. Sure, it’s an unnatural position, but we thought it got the point across clearly.

Not so apparently – so this time we fired up an app that is typically used in landscape mode, the YouTube app. We would have used the browser, but it hides the top row of the screen with the Wi-Fi signal strength indicator, so we just used YouTube (for the purposes of the demonstration and all).

Now, most people are right handed so it’s natural for them to hold the phone in their left hand and use their right hand to interact with the touchscreen. If you turn the phone left to put it in landscape orientation, your right hand will be exactly where the Wi-Fi antenna is. The obvious solution is to turn it right so that your left hand is holding the bottom of the phone.

We tried different grips on the HTC Sensation to check out how much each affected the signal strength. Some did more than others, but even putting your fingers on top of the antenna and not your palm was enough to degrade the signal.

Here’s the video we recorded.

Now, we’re not saying that you can’t browse the Internet on the Sensation while holding it in landscape mode. With the proper grip, you can browse without a hitch. BUT (it’s a big but), there’s no denying that the problem exists.

And again, it happens to all phones, but you can kill the Wi-Fi signal on the HTC Sensation just by putting it flat on the palm of your hand and that doesn’t happen to most other phones.

One curious detail is that our HTC Sensation has two contacts going to the back cover where the Wi-Fi antenna is. We’ve seen photos that have three contacts there though. It’s possible that there are two versions of the Sensation (Nordic Hardware who also demonstrated the issue also have a version with two contacts).

Ours is a retail unit from Vodafone, so it’s not a pre-release unit issue. But there’s a forum thread in XDA-Developers where people report various degrees of success in replicating the test. One user in particular posted a photo of the back cover of his Sensation (which has three contacts) and says there are no death grip issues with it.

We’d be glad to hear your input on this – any of you who have the HTC Sensation experience any signal strength issues (for both Wi-Fi and cell signals)? How many contacts does yours have and where did you get it? What about other phones?