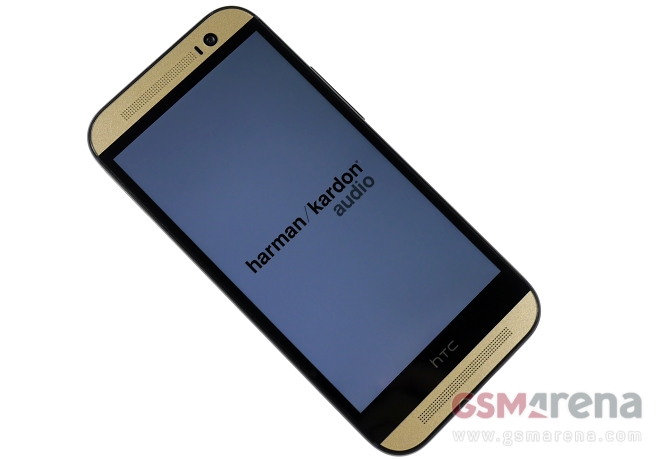 In addition to its solid audio credentials, the Harman/Kardon edition M8 also comes with a brand new, exclusive paint job. To top things off, the handset comes bundled with a high-end Harman/Kardon in-ear headset and six months of free Spotify Premium music streaming.

Hardware-wise, the HTC One (M8) Harman/Kardon edition is no different than its regular sibling. Users will get treated to a Qualcomm Snapdragon 801 SoC, 5” 1080p display, and 4MP UltraPixel camera. The H/K edition comes with 32GB of built-in memory on board.

Visually, the HTC One (M8) Harman/Kardon edition could well be the best looking member of the product range. The handset’s black unibody has kept the great-looking brushed metal finish, while the champagne gold speaker elements at the front add a nice touch of visual flair without being gaudy. The gold theme is also present on the back of the device via a ring around the camera unit.

In addition to the fresh color scheme, the special edition HTC M8 sports Harman/Kardon branding on its back. It is also pleasing to note that despite being a Sprint exclusive device, the M8 Harman/Kardon does not feature any carrier branding.

Performance and software-wise, the HTC One (M8) Harman/Kardon edition is no different than the version we reviewed extensively back in March. On this occasion, it is worth pointing out that Sprint deserves massive props for keeping the bloatware to a minimum on the device.

HTC M8 H/K features and exclusive, Spotify-themed live wallpaper. It has a neat trick which allows tagging unknown songs easily via a quick swipe from the left.

A look at the Harman/Kardon settings

Furthermore, the handset features a dedicated headset enhancement feature called LiveStage. It is designed to offer more natural sound experience with headphones. LiveStage has a number of presets available for several Harman/Kardon headsets, as well as one for all other headphones.

Speaking of headphones, the H/K edition HTC M8 ships with Harman/Kardon AE-S in-ear headphones in the box. They cost $149 on their own and represent a massive leap in sound quality over HTC’s own bundled headphones.

The bundled Harman/Kardon headset is superb

In the flesh, the H/K AE-S in-ear headphones have the same subtle champagne gold finish as the M8. The only quirk I found with the headset has to do with its three-button remote – the additional two buttons are weirdly utilized to change tracks, not to control volume.

The sonic experience offered by the headphones matches the expectations which their brand carries. Sound is pleasantly neutral, with well-sorted balance across the frequency range. The restraint of the bass is particularly impressive – it sounds deep and authoritative without eating into the rest of the range.

Finally, to top things off in the audio goodies section the buyers of the special edition HTC M8 will have the opportunity to snag the Harman/Kardon Onyx Studio Speaker for $99.99 when purchasing the phone.

The Onyx Studio speaker is one of the finest wireless speakers available today. If offers sleek looks and superb sound. It costs $399.99 on its own, so it should be a no brainer to go for it when picking up the phone.

At first we were somewhat skeptical about the benefits of the special Harman/Kardon edition of the HTC One (M8) in terms of audio quality. And that’s not because we don’t like the premium audio brand – it’s just that we didn’t see much room for improvement over what the original One (M8) is offering.

HTC still managed to surprise us, however, and has achieved even better results with the H/K edition. What was already the best audio output in business is now even louder – much more so than any of its direct rivals and as a matter of fact, any device we’ve tested.

Other than that, there’s little difference though – and that’s not a bad thing. The smartphone’s audio output is still perfectly clean when working with an active external amplifier and there’s virtually no degradation when you plug in a pair of headphones. There’s next to no stereo crosstalk this time – just as before the One (M8) sounds almost as perfect with our test headphones as without them – a feat beyond the reach of any of its otherwise excellent rivals. 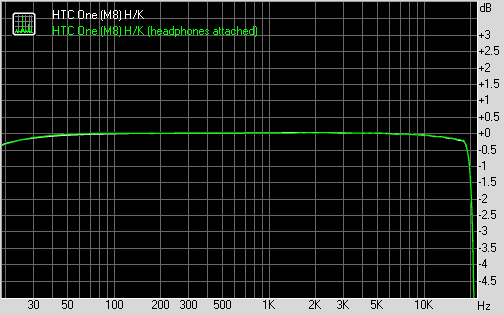 You can learn more about the whole testing process here.

With sleek looks and outstanding audio credentials, the HTC One (M8) Harman/Kardon edition is my pick of the M8 range at the moment. It was great to find out that the partnership between HTC and Harman/Kardon did not stop at company branding and bundled accessories – it truly makes an already superb audio device even better.

Even more importantly, despite its enhanced audio experience and bundled accessories and music service, the H/K HTC M8 carries a very small price premium over its regular siblings. Its on-contract price is $229.99 as opposed to $199.99 for the regular M8. It makes choosing the special edition handset a no brainer so long as you like its visual appearance and Sprint as a wireless carries.

The only downside of the special edition HTC M8 has to do with its availability. The audio powerhouse is only available for Sprint in the United States, thus depriving it from the wide market exposure it deserves. Here’s hoping that both HTC and Harman/Kardon will soon address this injustice in a proper manner.