HTC One has just arrived at our office and is here to stay for a review. The HTC flagship is supposed to feature some advanced camera tech behind those 4 million+ ultrapixels, so the first thing we did was a quick impromptu shootout. 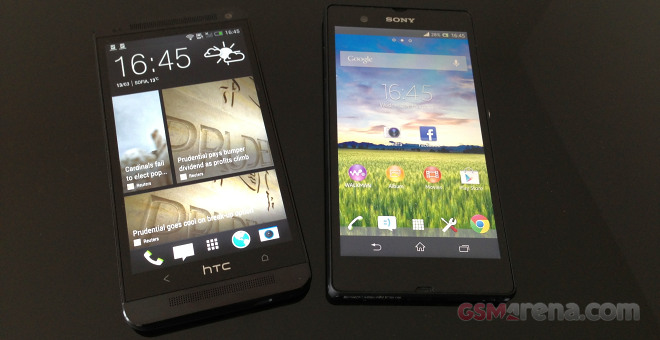 Unlike most of its competitors, the HTC One bets on fewer, but bigger size pixels on its image sensor, rather than many tiny ones. In theory this should allow it to shoot photos that have less digital noise and more dynamic range. But of course, you have got to remember that when you downsize a say, 13MP photo down to 4MP it also visibly decreases the digital noise.

Anyway, we would refrain from passing a judgement at this stage (we’ll save that for the full-featured review), but here are several comparison shots of the HTC One and the Sony Xperia Z, which has a rather densely packed 13MP camera sensor, featuring one of the smallest pixel sizes currently used in flagship products.

Here they come. We’ve shot with both cameras in their native modes, which means that you get 16:9 samples from the HTC One and 4:3 pictures from the Sony Xperia Z.

We took a close-up indoor shot with each of the phones as well.

Finally, we did a couple of shots in low-light, where the HTC One camera should supposedly shine.

So, which camera samples you like more – HTC One’s or Xperia Z’s?