The HTC Desire 816 is the company’s second phablet after the HTC One Max from last year. Unlike that one, the Desire 816 is a mid-range device with specs similar to the new HTC One mini 2. Not an aluminum unibody though it does have front-facing stereo speakers and a 13MP camera. 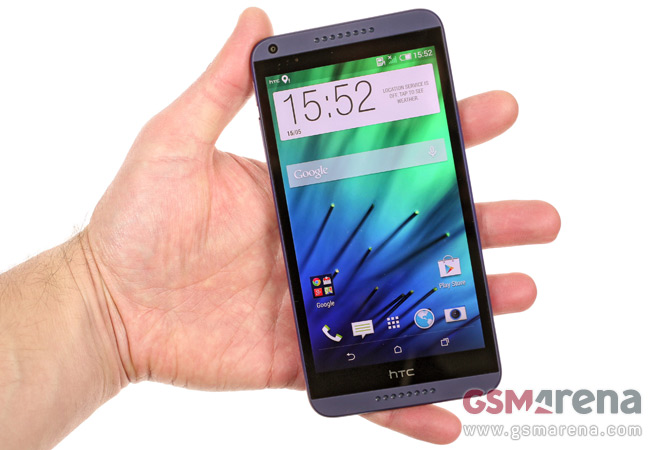 So, why hasn’t HTC entered the phablet market the way Samsung, LG and Sony has, not to mention the countless smaller brands?

HTC has mostly stayed clear of the tablet market too in order to focus on its core business, phones. The trajectory has been clear for years though, bigger screens sell and phablets are just ahead of the curve on that front.

The HTC Desire 816 packs a 5.5″ LCD of 720p resolution with 267ppi. It’s a good quality screen too, with great image quality and viewing angles. HTC has put Sense 6 on top of Android 4.4 so you get the same software experience as with the One (M8).

The HTC Desire has a large 5.5″ screen

Sense doesn’t have floating apps or split-screen multi-app features like some other custom UIs, but the phablet is reasonably snappy so you can switch between apps easily. The device is powered by the same Snapdragon 400 chipset found in the One mini 2, except with 50% more RAM, 1.5GB, a boon for multitasking.

What we miss from Sense on the One (M8) is the swipe to wake and double tap to wake features. The Power/Lock key on the Desire 816 has been moved to the left side but it’s still pretty high up so it’s hard to reach with your thumb.

The extra height comes from HTC’s BoomSound speakers above and below the screen. They have built-in amps, just like the One (M8) flagship smartphone. At 156.6mm the Desire 816 isn’t the shortest 5.5″ phablet, but on the up side it’s fairly thin (8mm) and light (165g). It sits well in the hand though some will find reaching the top of the screen a stretch.

With Sense and BoomSound trademark features clearly visible, there’s one that is conspicuously missing – UltraPixel. The HTC Desire 816 has a 13MP main camera with a BSI sensor that can record 1080p video. There’s a 5MP selfie camera with its own BSI sensor and 1080p video capture mode (and software to pretty you up).

Frankly we were a little disappointed with the camera on the One (M8) so we’re excited to try out the new camera, which is used on the One mini 2 as well.

This only leaves one potential problem for the HTC Desire 816 and it’s a big one – the battery has only 2,600mAh capacity. Phablets offer superior browsing and multimedia experience with their large screens, which makes a large battery a must. We’re running our battery tests to see if HTC managed eke out a decent battery life out of the smallish battery.