After a bunch of casual games for mobile, Zynga has finally released something serious for the hardcore gamers, if at all you can use that term for mobile gamers.

Horn is a third person action adventure game that has you fighting hulking monsters and solving puzzles in beautiful environments. We decided to take a closer look.

The land of Reynes was a happy and prosperous place and therein lived a young blacksmith’s apprentice known as Horn. One day he woke up inside a strange tower with no clue as to how he got there. Soon he learns the place where he lived is now destroyed, all the people gone and is now overrun by mechanical monsters called Pygon.

Now he must find out what caused all of this and lift the curse that had befallen on the place he calls home.

In Horn, you are in charge of the titular character. You move him around by tapping where you want to go on the screen. There are no traditional joystick controls here and right off the bat you can see the problem. This control mechanism works well in top-down isometric games but in a third-person game such as Horn it often makes things a lot more difficult. You can’t make fine movements and you often end up missing the location where you actually wanted to be. An option to adopt the standard joystick controls would have been much appreciated. 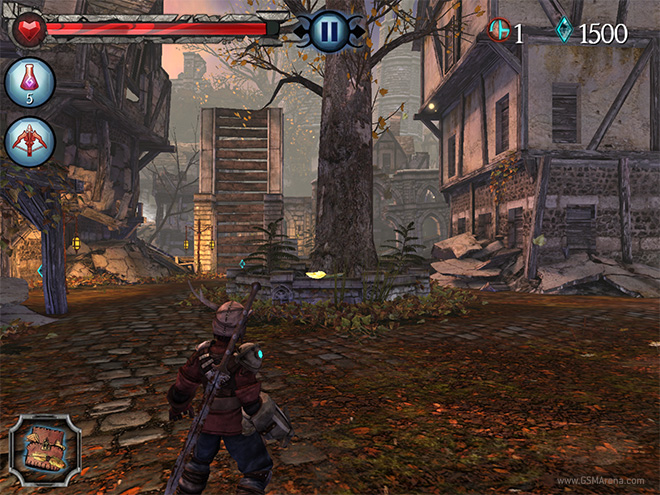 Once you get past the movements, you find out you interact with objects on screen by touching them. If they are at a distance, Horn moves there and interacts with them. You will often have to jump gaps. In that case you just point where you have to go and he does the jumping. At times the distance is too large, in which case you have to tap the ledge again while he’s mid-air to grab it at the last second and then swipe up to raise yourself on it. 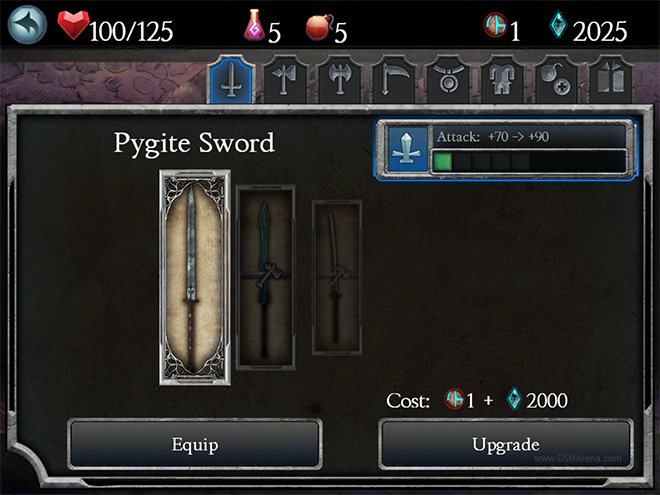 For combat, you can use a main melee weapon such as sword or an axe and a long range weapon in the form of a gauntlet that fires arrows. The gauntlet can also be used as a medieval grapple to point at hooks and pull yourself up. The weapons are upgradable and there is a great variety of them, although I managed to get through the game by just using the basic sword with occasional upgrades. The enemies in the game are all gigantic mechanical creatures several times your size. The battle begins as soon as you approach them and you are locked in a circle around these enemies. You can either attack or dodge sideways using the keys in the bottom corners. 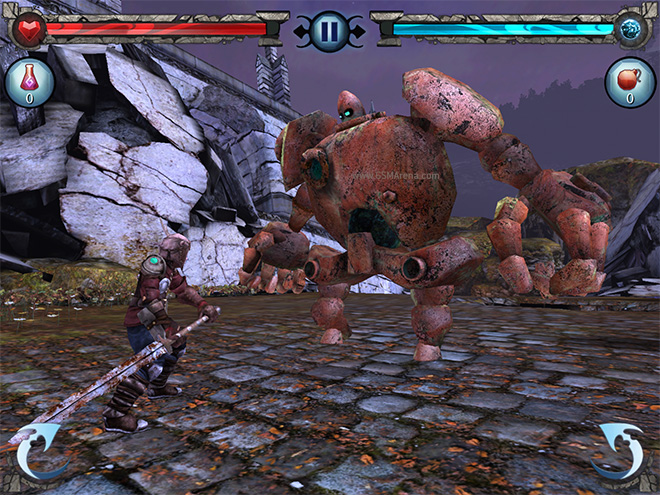 Attacking is done by swiping your fingers on the enemy and Horn automatically swings his sword in that direction. This is identical to the combat in Infinity Blade games. You can either take down enemies by continually hitting them and dodging their attacks or be smart and go for their weak point. Each enemy has a weak point in the form of a blue orb. In some cases it’s plainly visible, in others it’s hidden. Find it by attacking the creature and then just a couple of hits on the weak point can take down the beast, even if it is still at half its health. 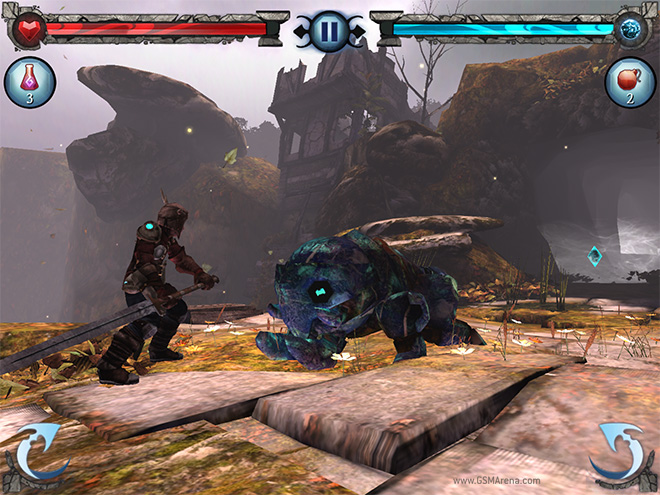 Horn also has a fair amount of puzzle solving but these are almost always very simple. In most cases you have to light up some torches to open doorways. To light a torch, go to one that is already burning and fire an arrow from your gauntlet through it towards the unlit torch. The arrow, set on fire by the first torch, lights up the second torch. At times you have to light up several torches by lighting them up one after another.

The problem with the game is that there is not much variety in what you do. You’ll either be doing some minor platforming, killing Pygons or lighting up torches. This forms the majority of Horn’s gameplay and you see all of it in the first hour of so. The actual game, however, is much, much longer and the lack of variety in the gameplay becomes very obvious after a while.

The visuals are one of the strong points of Horn. The level design is good, the enemies look amazing (there is a good variety of them, too), the animation is great and overall Horn just looks like something that would be at home on an older console such as the PS2, except it’s running at a much, much higher resolution, especially on the new iPad where the game supports high resolution Retina graphics. The textures are a tiny bit bland but that’s to be expected in a game with such vast environments. I tested the game on the new iPad and got consistently smooth framerate throughout. 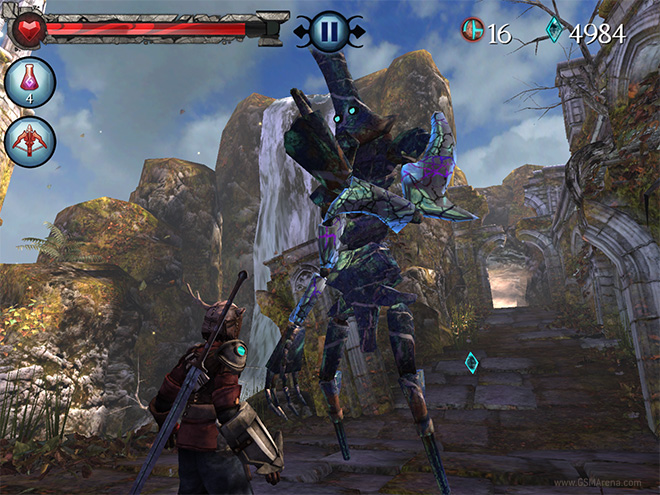 I would like to make a note about the recycling of levels in the game. The game has you collecting several objects and each one has its own mission. Unfortunately, these missions usually begin in the same environment but later on instead of going down one path you go down another. This gives a major sense of déjà vu at the beginning of every mission. The game is very long, so you’ll still see a lot of variety in terms of visuals but I would have preferred a shorter game with fewer recycled environments.

The sound in Horn is also very good. The main theme is catchy and other sounds such as those of the Pygon or the environments are also done well. The dialogue in particular are very good. The game is peppered with conversations between Horn and the dismembered head of a Pygon he carries around with him. The conversations are amusing because the head is actually evil but is now completely helpless and at Horn’s mercy, so it has no choice but to do what Horn tells it to do but that doesn’t stop it from making snide remarks all the time. These conversations often help lighten up the mood after several minutes of splicing monsters and lighting up torches.

Horn had a lot of potential to be a great game but fell short of our expectations. The game tries to impress with its console quality graphics, impressive voice acting and a genuinely intriguing story but falls short with the use of simplistic gameplay mechanics more common to mobile games. It would have been nicer if the developers had juiced up the several hour long campaign with more gameplay elements instead of making you do the same things over and over again. The iffy controls and the recycled environments don’t help either.

All said and done, Horn is still an impressive game and definitely one of the best that came out this year. But underneath that hardcore exterior it’s still pretty much a casual game.