Here’s the winner of the Nokia Shorts 2011 video contest, it’s so cool

You may have never heard of Nokia Shorts, and no it’s not some dirty euphemism for underwear. It’s actually a creative contest for film-making for artists, armed with the world’s current camera-phone top dog the Nokia N8. 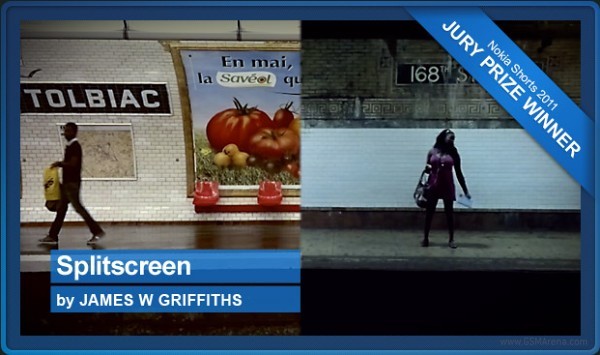 The winner is a chap, named James W Griffiths, who made a split-screen video showing us two different points of view of two people, living in different cities. He’s called it “Splitscreen: A love story”. The video is brilliantly thought out and you can tell the creator spent many hours, if not days waiting for the right shot – and later on with the montage to blend it beautifully. You can witness the seamless end result – the bikes coming from one screen and then entering the next and so on. It’s all incredibly creative – hats off.

The Nokia Shorts 2011 contest was hosted by the video-sharing website Vimeo. “Eight filmmakers had a $5,000 production budget, 2 Nokia N8s, and just a few short weeks to turn their idea into a finished film.” – that just about sums up the process. Oh and there is the little detail of the $10 000 first place prize and a sweet spot at the Edinburgh Film Festival.

Here’s the winning video itself and if you feel like finding out more about it and checking out a few “making of” videos head on over to the source link below.