Now, ten years later, Rockstar has ported the game over to iOS and Android. The Android version had a few hiccups out of the gate but since then things have been sorted. We decided to take a trip down the Vice City streets to see how the game holds up after ten years.

Some of you may already be familiar with the plot of this game. You play as Tommy Vercetti, a mafia hitman who is released from prison after fifteen years for killing eleven men. He starts working for Liberty City’s drug kingpin Sonny Forelli after his release, who sends Vercetti to Vice City to prevent him attracting too much attention in Liberty City. During one of the cocaine deals, things go pear shaped as Vercetti’s men are shot dead by unknown people. Vercetti then tries to find out who did this to him, while slowly taking over the reigns as the new cocaine kingpin in Vice City. 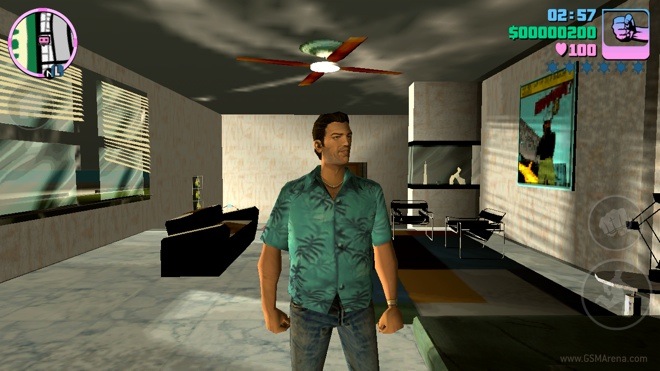 If you have played the original game then there won’t be any surprises waiting for you here. The game is a proper port, so everything happens as in the main game. Then again, if you’ve played the original, it’s likely that it wasn’t any time soon, so it’s not really going to feel repetitive.

The gameplay in Vice City is typically GTA. The story is told through the missions and cut scenes. Most of the missions are basically chores that you have to do for someone or things that you need to take care of. This could be boring for some but the story keeps things interesting.

As in any GTA game, there is a ton of driving to do in this game. You can pick up pretty much drive any car with the press of a button. As usual, if there is someone driving it, your character will throw that person out and drive off. 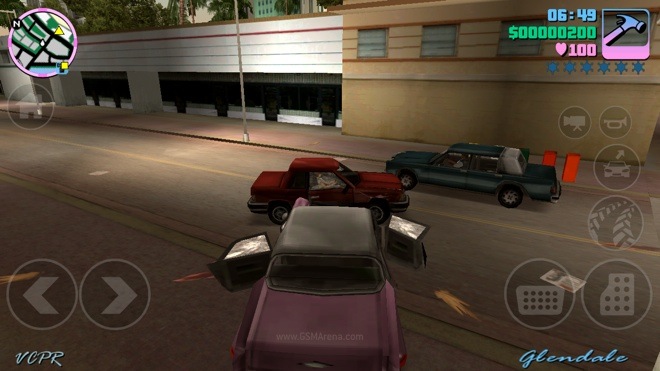 Unfortunately, the driving sections are worst part of the game. The vehicles are a chore to drive because of the poor handling. It’s ridiculously difficult to keep the car going straight or turn the way you want to. Some of them don’t even stop in time. Add to this the narrow streets and the constant two way traffic and you end up crashing your car every few seconds. It might seem fun the first few times but then when you have to get somewhere it just becomes annoying.

I personally found two wheelers, especially scooters better to travel around than the cars. They are more nimble and easier to slip through gaps. Given a choice, always pick a scooter, unless the mission demands driving a car. 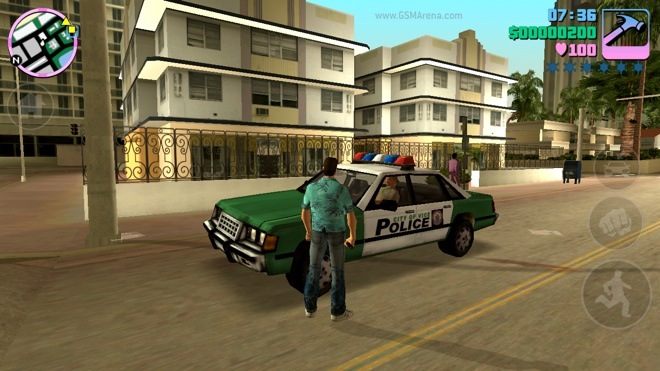 The default driving controls are left and right arrow keys on the screen. These are quite difficult to see when you’re focussing on the game and you keep missing them, making the driving experience even worse. You can switch to a standard joystick, which is easier to use but controlling the car becomes more difficult then.

Other parts of the gameplay require running around, shooting or punching people. The shooting feels a bit weird but you can switch to a first person mode for greater accuracy. The punching doesn’t require much effort other than pressing a single button repeatedly until your opponent is down. 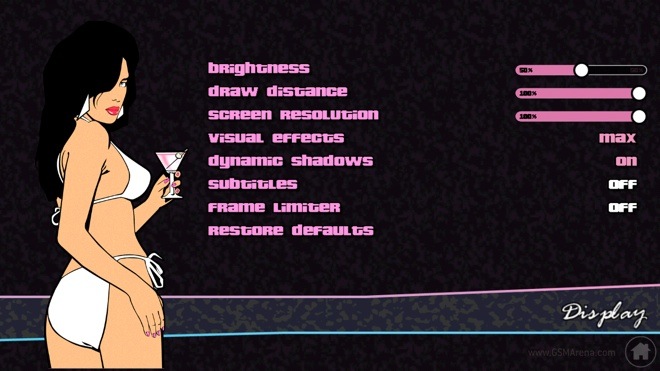 Both the iOS version and Android version have some unique features. On iOS, the game automatically saves your gamesaves on iCloud, so even if you reinstall the game or install it on another device, they get synced and you can continue where you left off. You also get the ability to use the music from your iTunes library instead of the radio in the vehicles. On Android, you can use Bluetooth gamepads, which should provide a better experience. Also, on Android, you can customize the visual settings, although they don’t really add anything but just let you turn down some settings if your device can’t handle the full blown visuals.

The Vice City visuals have been upgraded to run at higher resolutions on mobile devices. It’s interesting to note that the game now runs at resolutions that’s not just higher than the consoles that were available in 2002 but also today’s consoles, all in the palm of your hands. 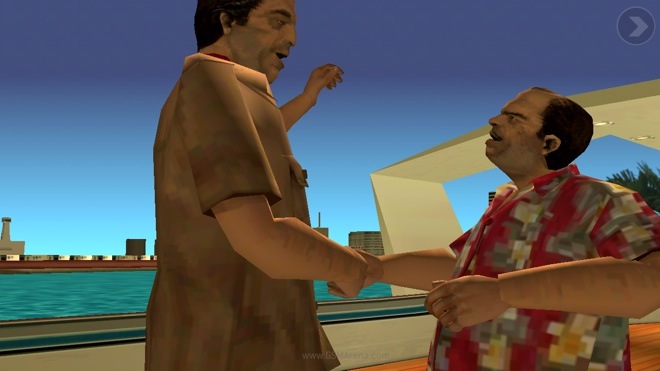 Having said that you are still looking are very few polygons on the screen, and the higher resolution does nothing to hide that. Every object you see is about as curvy as the Pyramid of Giza. And then there are the low resolution textures. That’s a given, considering the age of the game. Not saying it’s a good or a bad thing, but it is what it is. Don’t go expecting high quality visuals comparable to today’s games because you won’t get them.

Having said that, Vice City still looks pretty good. The vast open world city is still the biggest attraction here and although things don’t look as varied as they do in the newer games it’s still quite impressive.

Sound, however, remains stellar in the game. Sure, some of the sound effects are dated but they are more than made up by the utterly fantastic radio stations that Rockstar has in these GTA games. Not only are there some good songs in there but the radio jockey chatter and the advertisements are an absolute hoot to listen to. And the dialogues and voice acting are also a cut above the rest, even by today’s standards.

Grand Theft Auto: Vice City for mobile is a GTA game through and through. If you’re a fan of this series then there is no reason not to pick up this game. You get several hours of enjoyable gameplay with a decent story to back it up. And Rockstar’s usual tongue in cheek humor shines through the dialogues and the radio stations that you find in cars. And then, of course, there is the ability to run over innocent pedestrians, which you can never get enough of. Overall, Grand Theft Auto: Vice City is a very entertaining game and a must have for GTA fans.