Still, from what we have already seen demoed, Google’s little smart car is driving like a champ and is well on the road to being truly independent. The amount of technology and innovation that makes an act that we perceive as relatively simple, fully automated is staggering, but, as in turns out, not as new and outlandish as some would think. A newly compiled infographic helps shed some light on everything going on under (and over) the hood.

At the core of Google’s driverless car is a Laser Range Finder. It is a rotating sensor, mounted on top if the car which uses a camera and an array of 64 laser beams to judge distance and create an accurate 3D map of the vehicle’s surroundings. This allows the little car to know what is happening around it, actually, it covers quite a bit of ground, extending to 200m all-around. The technology is very reminiscent of that in Google’s own Project Tango, the development of which has surely influenced progress on the car. 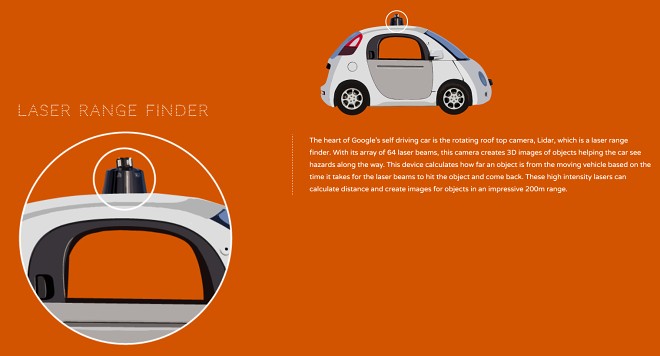 Of course, all the data in the world is useless if the car can’t make sense of it. That is where the real magic happens and the software has gotten to a point where it can accurately distinguish between various objects on the road and adjust accordingly. For instance. It knows when a two-wheeled vehicle is a motor bike, rather than a bicycle and can make decisions based on speed, movement patterns an even recognize standard turning signals, as well as the road signs, signs and stop lights. 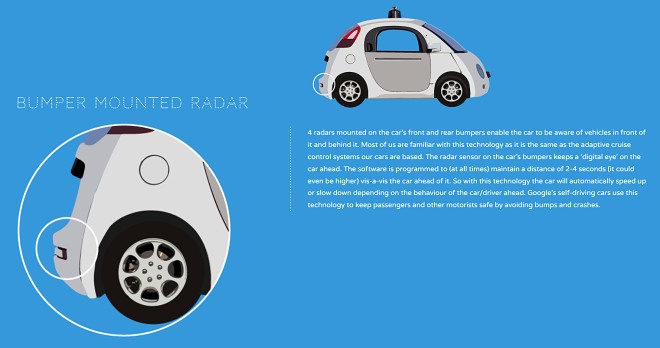 This spatial awareness is enhanced even further by an array of other sensors. These include a front-mounted camera, as well as a four radars on the front and back bumpers. The former relies on video to detect objects directly in front and, more, importantly, what they are. The latter is more-concerned with keeping track of distance. A similar system is already employed in modern day adaptive cruise-control technology. The purpose here is mostly the same – keeping the car a safe distance away from other surrounding vehicles. As far as the sides of the smart car, they are also covered by an ultrasonic sensor in the rear wheel. It, however, usually kicks in to help with tight parallel parking, another feature we have already seen in current cars. 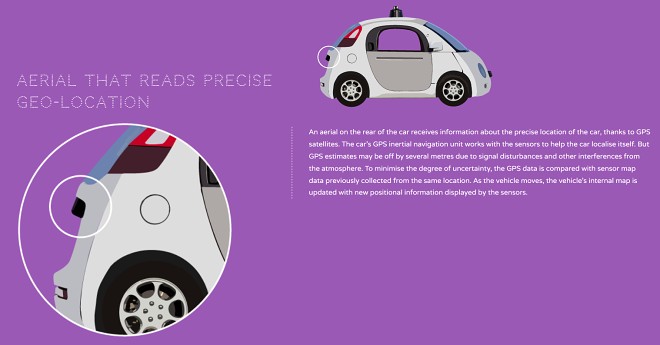 The list of technologies goes on and includes things like precise geolocation sensors, gyroscopes, altimeters and tachymeters for an even broader picture of data, while on the road. Check out the source link below for the full infographic.