Bit.ly on the other hand are expanding their services with bit.ly Pro. It’s getting quite crowded in the short URL business…

For now, Google’s URL shortner, called goo.gl, works only with the Google Toolbar and Feedburner. It is possible it will open up and work as a regular URL shortner – Google do like to know which links get clicked. If people like it, then it’s quite possible that goo.gl will become just another facet of Google’s services available to the public at large.

Facebook on the other hand uses theirs, fb.me, for just its mobile interface and its not clear if they’ll get into the URL shortening game seriously.

All this should be making bit.ly and (the likes) quite nervous. It scored big when it became the default link shortener for Twitter. And Google (among others) already include live search results from Twitter. All this amounts to 2.1 billion links shortened. That’s billion! The previous year they did just 11.8 million. If you want to calculate the YoY growth in percents, be my guest.

But bit.ly are countering Google’s and Facebook’s entry into their business by offering a Pro service. This bit.ly Pro service allows you to create short URLs that start with a domain of your choosing. It’s a beta for now but it could become very popular.

For example, New York Times uses nyti.ms. The benefit of this is that a nyti.ms link will take you to the NY Times page, while a generic short URL is a lot more ambiguous. There are efforts to weed out short URLs, which point to malware, but still personalized links will always be safer to click.

To finish off the short URL topic, here is a benchmark of some of the most popular URL shorteners. Because as everyone on the Internet knows, benchmarks make all arguments better. 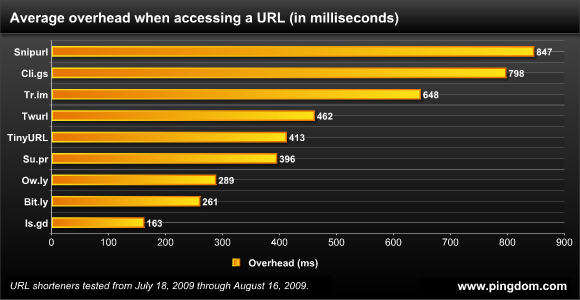 It’s a bit dated and doesn’t include goo.gl and fb.me (which are limited to specific apps anyway), but it’s still interesting – for example it shows that is.gd is the fastest, while ow.ly is the most reliable. Also, it’s a good baseline for subsequent tests, so we can see how much individual services have improved (or gotten worse).