In their newest game, you will be flinging fish out of the water and then depending upon how far they go you earn a score. Sounds simple, just like the other two games. But does this game have the same fun factor as well? Let’s find out.

In Fish Out Of Water!, you have a bunch of different fish that you have to pick up and throw across the screen. Depending upon how much distance you cover and how many times you skip on the surface of the water, you are given a score at the end. 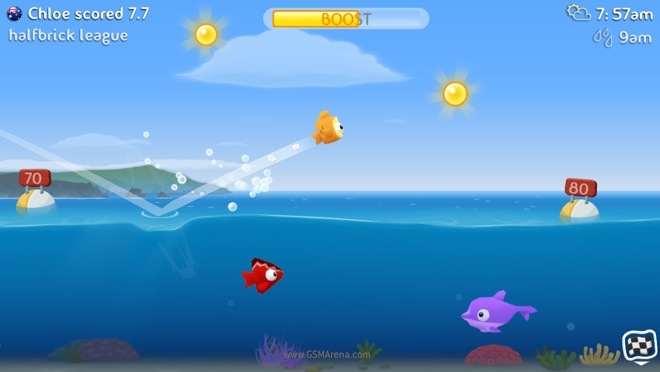 There are six different types of fishes in the game and you can throw any three in one game. Each fish has different characteristics. Some can cover a great amount of distance in the air, some are well at skipping on the surface of the water, some have more all-round abilities. One fish can even split into four, and although it can’t cover much distance you get four times the number of skips. Depending upon the total distance you covered with all three fishes and the total skips, you get a final score from a panel of judges consisting entirely of crabs. Some judges are more biased towards the distance you covered, some more towards the total number of skips. One just gives a generally good score and the other is the exact opposite. 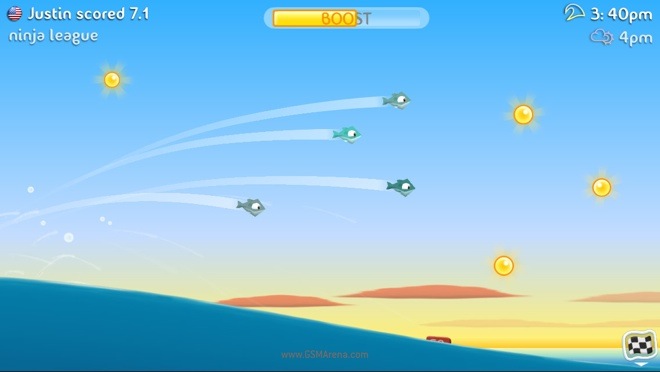 The game features dynamic weather that affects the gameplay storm can affect how far the fish will travel in the air and the rain makes the surface of the water unstable so the fish can’t skip as much as on a sunny day. You also get certain abilities in the game, which can be used to improve the performance of the fishes. 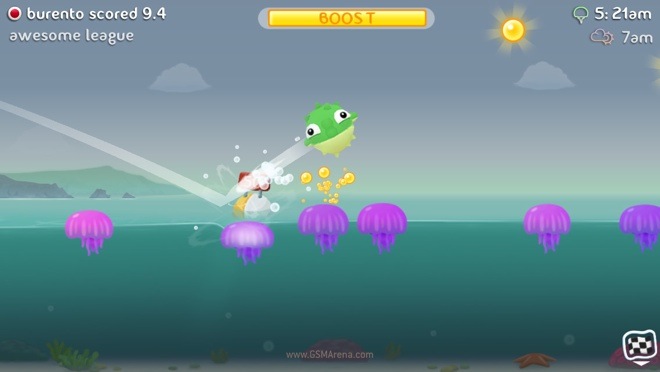 As mentioned before, the gameplay in Fish Out Of Water! is very simple. You just have to pick up and throw the fish across the screen and then later on use the boost at the right moment to cover as much distance as possible, which reminds me of Angry Birds and Tiny Wings respectively. Unfortunately, it’s too simple for its own good. There is not much depth in the gameplay and after five minutes of playing you have seen pretty much everything the game has to offer. 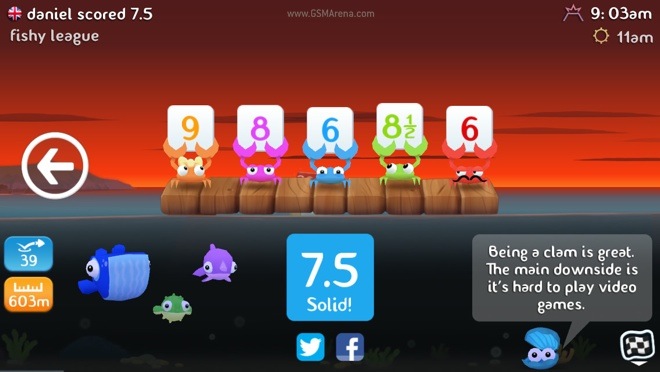 That wouldn’t have been too bad had the gameplay been addictive. There are several games out there with extremely simple gameplay but because of their addictive nature you keep going back to them again and again. Halfbrick Studios’ own two games are good examples of this. Unfortunately, there is nothing addictive about Fish Out Of Water! and the fish flinging action gets boring quickly.

Fish Out Of Water! has simple 3D animated visuals. The visual style is more similar to Fruit Ninja than Jetpack Joyride. It’s simple and although some of the fishes and their animations are cute, it’s nothing that stands out in particular or is noteworthy in anyway. The same can be said about the soundtrack as well.

Halfbrick Studios continues its tradition of making simple games that don’t demand too much from the player. But unlike their last two titles, Fish Out Of Water! lacks the fun factor and the addictiveness to make you want to come back to it again and again. Kids should find this game fairly entertaining but adults, not so much. It’s a decent game to pick up and play while you’re waiting for something but you’re not going to continue for more than five minutes.