Just as promised, today Mozilla released the next version of their widely popular Firefox browser. Firefox 5.0 has been available for download through the company FTP servers for a couple of days now, but now that it’s officially finalized you can get if straight from the Mozilla website or the Android Market. 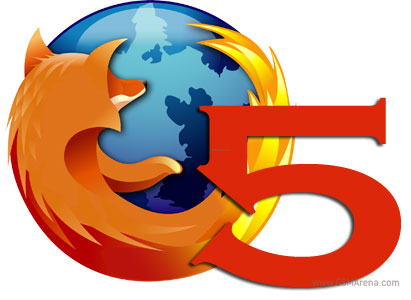 According to the developers Firefox 5.0 brings over 1,000 improvements and performance enhancements compared to its predecessor. That is no mean feat considering that its development only took three months.

The most notable changes in functionality will come to the Android version of Firefox. It will now include the Do Not Track privacy feature, which gives you more control over the way your browsing behavior is tracked and used on the Web. Also, the feature that lets you tell websites that you wish to opt-out of online behavioral tracking, is now easier to find in all Firefox versions.

Android users will get faster load times too, especially when using 3G networks for browsing. The mobile add-on gallery has been extended and the support for the popular SwiftKey keyboard has been improved.

Next on the major changes list is the support for CSS Animations standard, which should open the door richer Web applications and websites and that comes to all platforms.

Finally Mozilla released a new Firefox Add-on SDK for Windows, Mac and Linux to facilitate the development of add-ons for its browser. We all know how important add-ons are for the Firefox ecosystem so this might as well be the greatest of changes even if it doesn’t have any immediate effect.

Still we’d like to point out that Firefox 5 doesn’t alter the general browsing experience all that much. It’s certainly not as big a leap forward as Firefox 4 was, but everyone loves updates no matter how minor they are, right?

So the Firefox users (and those that consider converting to it) among you might follow this link and get the latest and greatest browser by Mozilla. Needless to say that Android users can get their updated browser with a simple visit to the Android Market.