The INQ Cloud Touch phone is on sale in the UK earlier than expected (it was slated for Q3), with some better specs but not quite the bargain price we originally saw. This Facebook-loving Android is coming out just in time – before the similar offerings from HTC get out (the Salsa and the ChaCha). 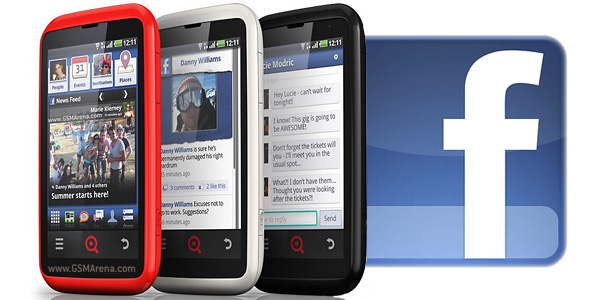 The INQ Cloud Touch is available right now from The Carphone Warehouse… for £300 SIM-free (which is $490, or a whole of a lot pricier than the $250 we heard originally) or for £18 a month with a 24 month contract (and the phone is free).

Contracts are available for Talk Mobile (theirs is the cheapest with unlimited Internet), O2, Vodafone and 3 UK.

Here’s a quick overview of what you get for your money – a 3.5” HVGA screen, 800MHz CPU (instead of 600MHz like originally announced), 512MB RAM, Android 2.2 Froyo, 4GB microSD card pre-installed, 5MP camera and other goodies.

And of course, there’s the custom user interface – the INQ Cloud Touch comes with deep integration to Facebook.

The INQ Cloud Touch has marginally better specs than the HTC Salsa (the faster CPU mainly, but it runs an older version of Android). However, it lacks the brand recognition that HTC has built up. Got you interested?