[E3 2011] Nintendo unveil the next evolution of their home console: the Wii U [VIDEO]

The Wii wowed crowds, broke records and opened the gates on the motion-control gaming environment, its innovative gameplay mechanics acting as the catalyst that spawned similar systems from both Sony with the PlayStation Move and Microsoft with the Kinect for Xbox 360, which too have reaped the benefits in the next-gen motion gaming market. 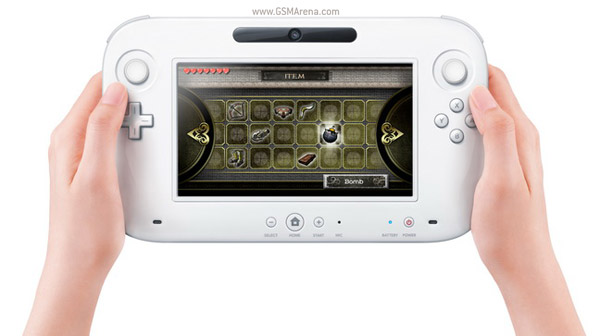 As soon as the Wii became a smash sensation there were those who asked what was coming next. Amidst all the speculation and rumors, people eventually caught wind of Project Café, expected to be Nintendo’s next home-console platform. Initially nothing was known about Café say for that its hardware capabilities promised more than anything we’d seen previously from any of the three main companies. Official names flew around with some expecting the Wii 2 and others the Nintendo Stream but at their E3 press event they unveiled, at least in part, what they’d be keeping locked away for so long.

Surprisingly they produced a new controller design with a name nobody had directly anticipated, the Wii U. The controller itself is an intriguing design, a rectangular white slab that sits with a 6.2″ touch screen (supposedly around 1280×720 resolution) in the center. Videos showed a stylus being used directly on the screen which might (but hopefully not) make it a resistive touchscreen, on the flip side a host of videos mocked up its use as a sudo-tablet with sharp graphics and quick responses. The controller also features dual circle pads (similar to that of the 3DS’), ‘A’, ‘B’, ‘X’, ‘Y’ buttons, a D-pad, speakers, dual-mics, dual triggers on the back and a front-facing camera (for Facetime-esq video calling). This paragraph out of context makes it sound like a gaming centric tablet, and in essence that’s what it is, however Nintendo were clear to point out, it does not function as a stand-alone device.

The Wii U’s controller screen displays companion information to what’s being played or viewed on the main console, but the video output can be switched and streamed over the air to the display on the controller itself if desired, an interesting idea to say the least. Nintendo showed the controller interacting with the existing WiiMote and Nunchuck combination that further made for some interesting game mechanics. What this also means is that existing games might be able to garner some new life with the addition of a Wii U controller thrown into the mix. Another ability demoed was that the controller can be used as games console in itself (as long as it’s in range of the base station console supposedly) and it can browse the web too.

Strangely Nintendo focused almost solely on the potential brought to the table by this controller, with effectively no mention of the next gen console itself. They spoke of the “Wii U controller” but never moved on to the “Wii U”, a disappointment for myself, but I’m sure they had their reasons. From what we can surmise about the console itself. It’s small, similarly sized to the current Wii with softer edges. Both the console and controller keep the same stark design feel, not quite Apple but you get the idea.

3rd party developers have always been a weak point for Nintendo, looks like this time they intend to fix that

The videos show some current-gen looking stuff but sprinkled in there are a couple of high definition things that certainly raised eyebrows. One portion of a video in particular showed a beautifully rendered Link face off against a giant spider (Armogohma for the fans) in what could potentially be the look for the first HD Legend of Zelda game. There’s not a lot left to say about the console itself. Nintendo presented a list of partners and titles some of which would only really be able to be pulled off on a high-def system. Whatever they plan to do with the Wii U, I am intrigued and excited and we can only hope the next big gaming event in the calendar will play host to the console divulging more of its secrets.