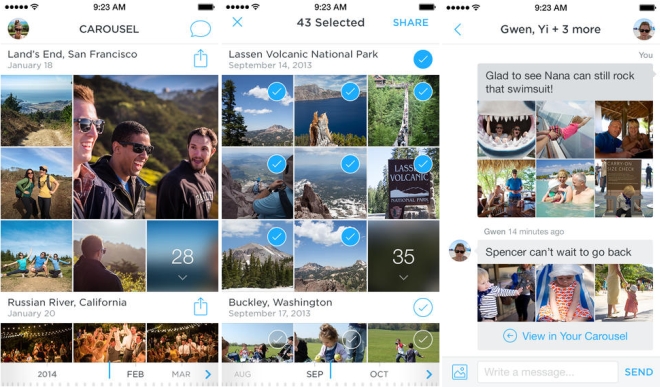 Dropbox for Business gives admins features like remote wipe, account transfer and sharing audit logs. One new feature arriving later is Project Harmony, which lets you see who is editing a file and chat with other users, similar to Google Drive.

Then there is a new app called Carousel. Carousel is a gallery app that connects to your Dropbox account and shows all the photos you stored online, along with locally stored photos. It will also upload all your locally stored camera photos to your Dropbox account and works in the background to upload any newly taken photos. Along with being able to view photos, Carousel also lets you share them with people as a single image or a whole group of them and you can add images shared by others to your account.

While it’s a well-made app, I found it was unnecessary to upload all my camera photos to Dropbox. The app does not ask you before it starts uploading and there is no way to disable it. If you have the app installed, it will constantly try to upload your photos, which eventually led me to uninstall the app. Carousel is available on both iOS and Android.

Lastly, there is Mailbox for Android. Mailbox is an app that arrived on iOS last year and was then acquired by Dropbox. It’s a very slick app that makes it very easy get rid of mails from your inbox and achieve the ‘Inbox Zero’ goal. The same app has now been ported over to Android as well. Just like the iOS app, Mailbox on Android supports only Gmail and iCloud accounts and you can’t add any other email service. Like the iOS app, it works pretty well but then unlike on iOS, Android wasn’t in dire need of a better Gmail app as the stock app works quite well. So although it’s a great app, it won’t really be essential for most people.

Dropbox also announced a Mac version of Mailbox, although that will be arriving later.

You can download Carousel and Mailbox from the links below.