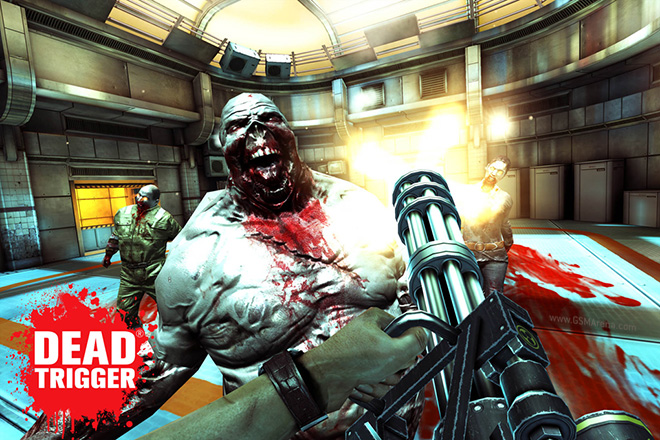 Dead Trigger is developed by Madfinger Games, the same people who have given us the excellent Shadowgun and Samurai II: Vengeance. Dead Trigger is a first person shooter that involves everyone’s favorite pastime, shooting zombies in the face.

Unlike Shadowgun, Dead Trigger does not have much of a story and a campaign. The game starts directly in the map mode, where you are shown various missions that are available. Clicking the mission lets you play it and once you finish it you go back to the map and choose another one. It would have been nicer if there was a story and a campaign involved as it would have given you a reason to play the game, at least for the duration of the campaign. The current single mission based gameplay is more suitable for pickup and play gaming, with each mission lasting no more than a couple of minutes. 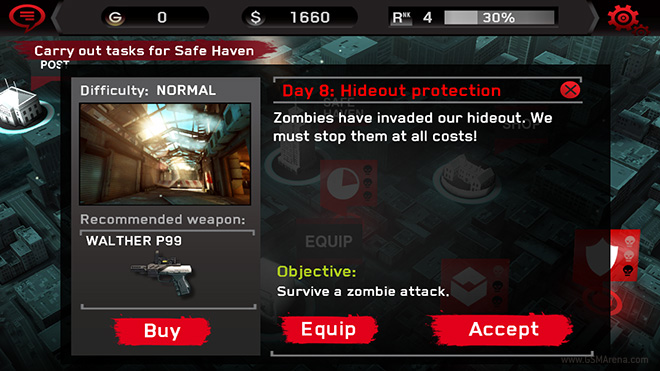 There is a small variety of missions available in Dead Trigger. Some missions involve you to simply mow down the zombies with your weapons until you hit a specific number. Some require you to survive for a period of time as you face a seemingly endless supply of zombies. In some you have to transport item(s) from one location to another, while shooting the enemies. And in others, you have to protect gates and vehicles for a specific amount of time from zombies.

That’s basically all the variety you get in terms of missions. Eventually you will have to fight against more enemies, for longer or transport multiple items or protect multiple gates but you are still doing the same basic things. There isn’t much variety in the zombies that you face in the game either (we counted three), even though the official images suggest otherwise. It doesn’t help that there are just a handful of maps in the game, and doing the same thing in the same environment with practically no story quickly gets tiring.

To help you fend off the enemies, the game offers you a variety of weapons, from handguns to machine guns, rifles, shotguns and a mini-gun. As you play the game and level-up, you unlock more weapons, but whether you can actually buy them is a different thing altogether. Most of the weapons in the game are expensive and the game offers little in terms of free currency (acquired by killing enemies) to buy most of them. For that you have to use the in-app payment option to purchase more in-game money, which you will have to do if you want to use any of the cooler weapons in the game. To add insult to injury, the game gives you a kickass weapon in the first level, but then takes it away from you, locks it away (can be unlocked using cash, of course) and replaces it with a weaker weapon. 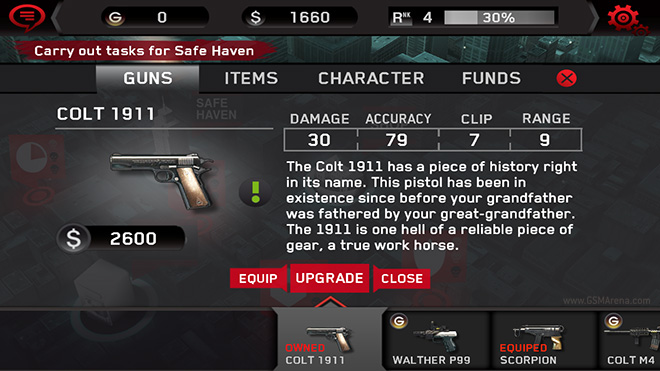 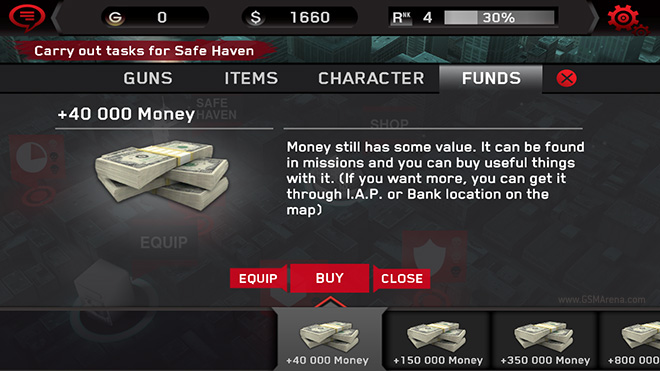 The graphics in the game are genuinely impressive. The Tegra 3 and iOS version (on iPhone 4S and the new iPad only), in particular look spectacular, with the smoke and water effects. Only problem is that the vibrant color palate of the game gets a bit tiring on the eyes after a while. The Android version of the game actually has three graphics settings: ‘low’, ‘medium’ and ‘high’. On Tegra 3 hardware, the game automatically adds and selects an ‘ultra high’ setting. At the lowest setting the game looks a bit bland but is still quite good. The game is playable on older Android phones such as the Nexus S at the lowest setting but can get a bit sluggish at times. 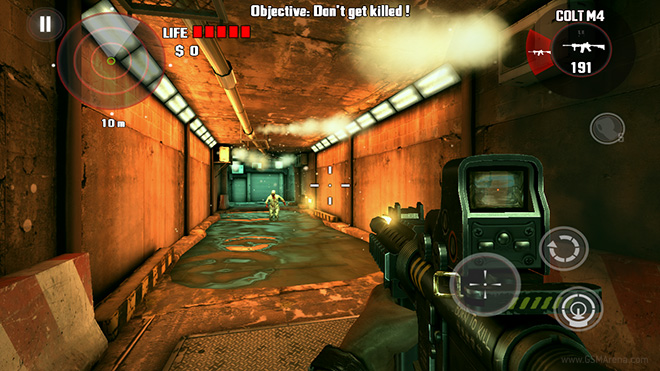 Dead Trigger employs basically the same controls as in Shadowgun. The left half of the screen is dedicated to character movement and the right portion is for the cross hair movement. Unfortunately, there are also several other buttons on the right, so you have to use whatever space is left for moving around, which can be a pain on small displays such as the iPhone’s.

What’s worse is that the controls are terrible glitchy. Often you will find yourself suddenly facing in some random direction as you try to move your player. This can be incredibly frustrating when you are trying to avoid an enemy or quickly turn around and you suddenly end up staring at the floor or somewhere else altogether. It also doesn’t help that you can often access the left portion of the screen from the right, which makes you physically move when you should just be moving the gun. The game supports gamepads on Android, which should make playing the game infinitely easier, but we didn’t have a USB On-The-Go adaptor at hand to test it out.

We wish the sound in the game was better. The zombies and the guns sound good but the sound direction is often flawed, so you can’t tell where exactly the enemy is coming from. The rock music also gets grating after a while and is best disabled. The main character also has a habit of parroting the same few taunts again and again at the enemies every time he kills them (voiced by the same guy from Shadowgun). 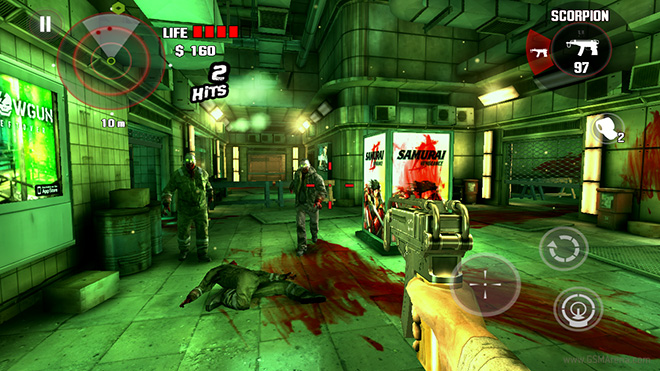 Overall, Dead Trigger is a great looking game that is fun when played in short bursts, as long as the controls don’t screw up. But the repetitive gameplay, glitchy controls and weapons that require you to spend additional money to unlock and enjoy the game properly prevent us from fully recommending it.