Last year’s Dead Trigger was quite a decent game. The gameplay was fun for most parts and the graphics looked amazing for that time, or even by today’s standards, for that matter. However, the experience was sullied due to overzealous in-app purchase options that a lot of people took offense to, especially since the game was paid. Eventually the game went free, so then there were fewer reasons to complain. 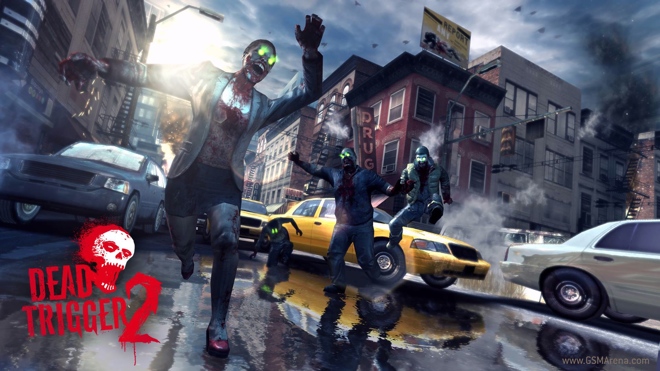 This year’s Dead Trigger 2 tries to take things up a notch by improving upon every aspect of it’s predecessor. As an added precaution, it is free from the start. With such a low price tag, it’s going to be tough to hold much against it but let’s see how it is anyway.

Just like its predecessor, Dead Trigger 2 is a first person survival horror game. You’re still killing zombies but instead of playing random missions the new game now has some semblance of a story and a career mode of sorts where instead of showing a bunch of missions on a map you go progressively from one location to another. There are some other events on a map that you can attempt but they are optional and can be played for additional cash. 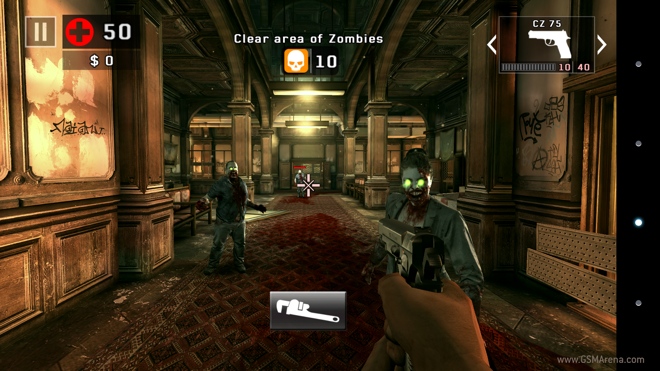 Madfinger had said something about people playing this game in a parallel universe, making it sound like an MMORPG (or MMOFPS in this case) of sorts, but that doesn’t quite seem to be the case. In all the time I spent with the game, I was the only one there. And there is no traditional multiplayer mode here, so you will only be playing alone against all the zombies.

Dead Trigger 2 improves upon its predecessor by having a lot more areas to play in, some new gameplay styles, such as gunning down zombies from a helicopter, new weapons such as the wrench that is always available if you run out of ammo (which tends to happen quite a bit later on) and the hilarious chicken bomb, which are basically bombs strapped on to live chicken who run around and attract the zombies and eventually blow up. 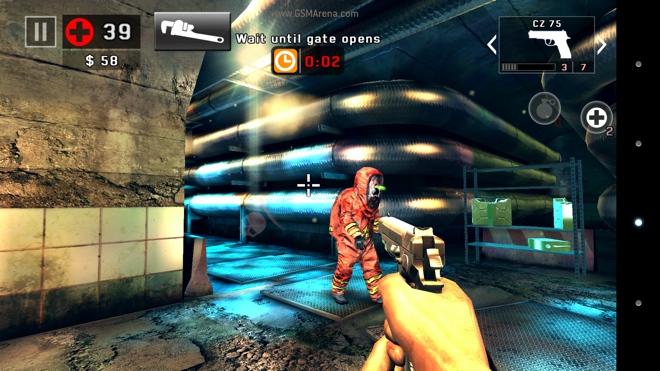 Another addition is a lobby where you have your own medic for your medical supplies, a gunsmith for putting together weapons, an engineer who creates ‘gadgets’ (basically grenades, mines and the chicken bombs) and a tech guy who lets you upgrade the other guys. There is also a smuggler who provides goods such as health booster, money booster, damage booster, etc. in exchange for gold. These are all nice additions and preferable to the sterile store for purchasing items in the previous game. 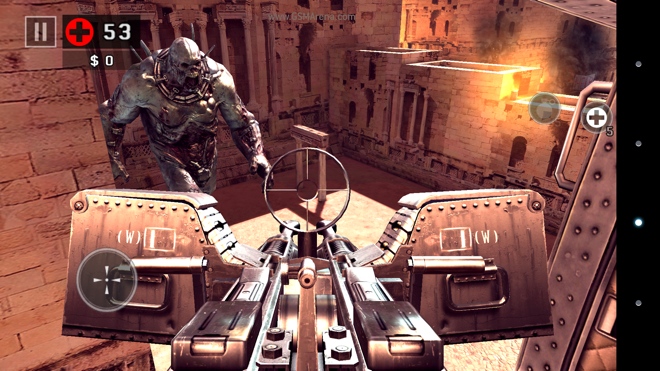 In terms of gameplay, Dead Trigger 2 is quite good. While the original game felt a bit repetitive after a while as you went from one cramped room to another, the new locations and story mode makes the new one seem less so. Dead Trigger 2 also throws in some mini-bosses into the mix every once in a while to make things interesting. Gunning down zombies from a helicopter also serves as a good change in pace. Overall, it’s pretty fun and it made me want to keep playing it rather than give up after a few rounds. 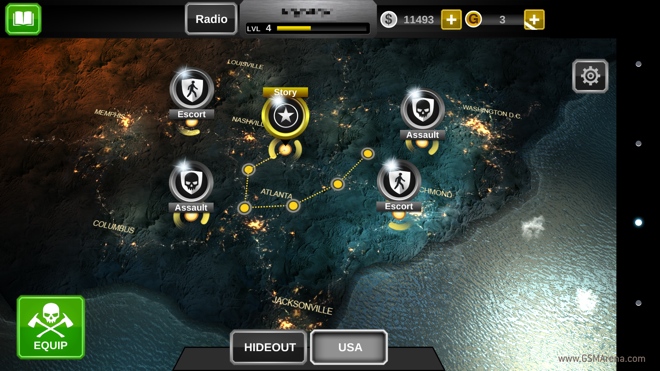 One interesting change in this game is the auto-fire mode. Whenever you aim close to a zombie the game would start firing automatically. This makes gunning down zombies a lot easier on a touchscreen. Having said that, it can also result in a lot of wasted ammo especially on machine guns. Thankfully, you can disable the auto-fire mode and go back to shooting manually. There is also support for controllers on both the iOS as well as Android version of the game, although we are yet to see any official controllers to be announced for iOS.

One cool feature is that you can log into the game using a Madfinger account and then it backups your progress. The account is common for iOS and Android devices so you can switch back and forth between the two and your progress is synced across every time. 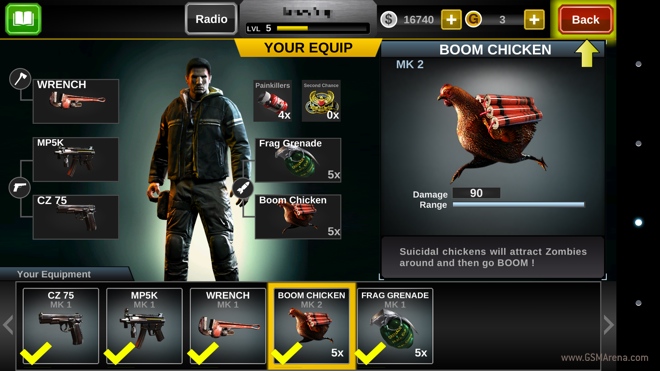 The original Dead Trigger was chastised for having a ton of in-app purchases built-into the game that made enjoying it properly difficult without spending more money on it. Although IAP exists in the new one as well, it has been toned down severely. Never once did I felt that I should be spending money on the game to enjoy it and the IAP options only existed to make things better, not make them bearable. So you can say they got the IAP right in this one.

There are few bugs in both the iOS and Android version of the game. On Android, often I was asked to press some button in the lobby when no such button existed. Only restarting the game fixed the glitch. A problem from the previous game where while moving suddenly the character would randomly just turn around and point somewhere else due to the game not interpreting your touch screen inputs has carried over. On iOS, the login screen kept entering the password in the username field repeatedly until the game was restarted. I expect these things to be fixed shortly but they are annoying right now.

The original Dead Trigger is a great look game but the new one is even better. Madfinger games have turned everything up to eleven for the sequel and it looks absolutely fantastic. I tried the game on Android, where you get two visual settings, low and high. Even on high the game runs fairly smooth but then again I was playing it on a Snapdragon 800 based LG G2. The low setting takes away some of the atmospheric effects but the game still looks good. In fact I started playing out with the Low settings and thought it looked amazing until I discovered the high setting later and was completely blown away. There are no visual settings on iOS and the game presents the graphics as it seems appropriate for the device. 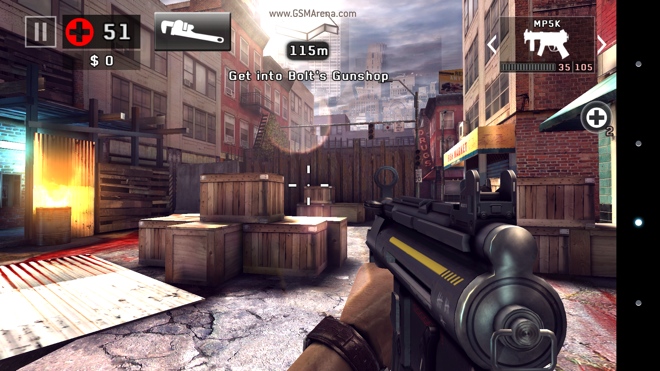 Sound-wise there is not a lot to say. The zombies mostly sound the same, just with different voices for the male and female ones. The guns sound respectable but the explosions lack the bite. The audio positioning isn’t perfect so it’s often hard to tell where exactly the zombies are coming from (although the game does show a helpful indicator on the screen). The music in the lobby is good, not so much elsewhere. The constant quips of the character as he guns down zombies and collects ammo can quickly become annoying.

It’s hard to review a free game, as it leaves very little room to complain about even if it is absolutely rubbish. Thankfully, Dead Trigger 2 isn’t and is actually quite a fun game. It also happens to look ridiculously good. The fact that it’s free just makes it all better. If you’re into shooting zombies for fun, then you should have downloaded this game, like, yesterday.

Dead Trigger 2 was reviewed on an iPad mini and LG G2.