Samsung is launching their ChatON service today – a free service that lets you send text messages (including group chat), multimedia and even hand-drawn animated messages. The Android app is live now and there’s a Bada app incoming. Some feature phones are getting it too. 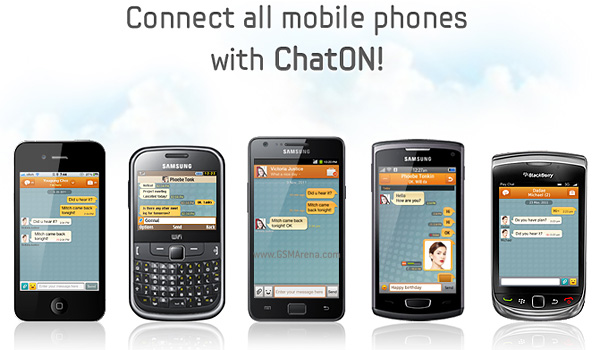 Basically, ChatON is Samsung’s answer to iMessage and BBM, with the added advantage of covering more platforms than just iOS and BlackBerry. Both platform will be supported by ChatON in the future.

ChatON incorporates some social networking like features – for example, you can post messages to someone’s profile even when they’re offline, you have Interaction Rank, which shows how much you’ve talked to that person, and the Trunk feature (it collects all multimedia from a given conversation) lets you comment on items in it or pass them along to social networking sites.

The animation message lets you pick a photo for a background and finger-draw something on it.

This video demo should make it clearer.

Aside from a dedicated app, ChatON will also work through a browser (that doesn’t seem to be enabled just yet), which will allow people to use the service as a general IM on their computers and will let platforms without an official app to join in too.

The premium feature of iMessage is the seamless integration with regular SMS messages. It’s not clear how well ChatON will do in that department on the various Android UI modifications and on other OSes.

You can find out how well it works on your Android right now (download ChatON from the Android Market or Samsung Apps). Or you can play the interactive game/movie Chat Away first, to get a feel of what ChatON is like.

Bada and select feature phones will come with ChatON preloaded starting this month (three Wave phones already have it) and other platforms should be able to join by the end of this year. There’s no info on when iOS and BlackBerry can join in (they can use the browser-based ChatON until a dedicated app launces).