The Ubuntu team has been busy working on a phone OS, but it decided to take an intermediate step and create a tablet OS. The timing of the launch coincided exactly with the HTC event (leading us to question if the two are related, turns out it wasn’t) and while the new HTC One got all of the attention yesterday, it’s time to meet Ubuntu for Tablets. 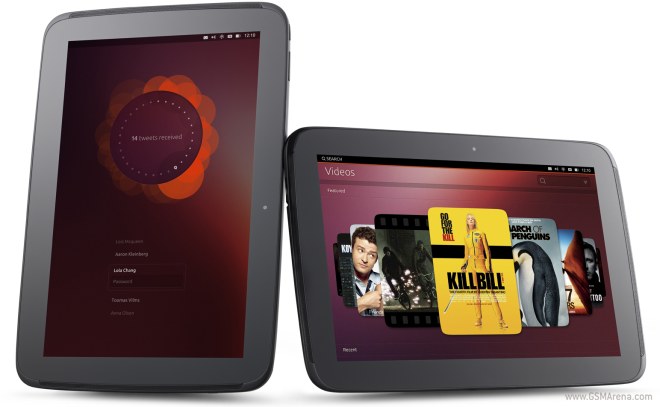 Ubuntu’s interface started off as a desktop UI, but Canonical – the company behind Ubuntu – has a vision similar to that of Microsoft. They want one interface to conquer all screen sizes, from a pocketable phone to the 60” TV on your wall.

The tablet OS itself uses the app launching and switching that we saw demoed on the phone OS (side note: you can try out a similar experience with this Android app, to see how it feels).

The tablet OS shares even more with the phone OS – you can use phone apps, docked to the side of the screen. This is called Side stage.

It may look similar to what Windows 8 is doing, but the idea here is that phone apps don’t scale well to tablet screens. Instead, they feel right at home occupying a small section of the screen, leaving the rest for tablet apps for a fresh take on split-screen multitasking.

The tablet supports multiple users with secure accounts plus a guest account. Canonical is getting into the voice command business too and are offering devs an SDK to easily tap into all the advanced features of the OS easily and develop for both phones and tablets.

Mark Shuttleworth, Canonical’s founder, has a vision that steps on the toes of the Asus Transformer Pad. A phone would be able to go into a tablet dock and display a tablet UI – with the phone apps going into the Side stage. With a keyboard and mouse, you get closer to desktop Ubuntu, while hooking it up to a TV turns it into a media center.

So, want to try out the new OS? Tomorrow you’ll be able to install Touch developer Preview of Ubuntu on a Nexus 7 or a Nexus 10 for the tablet experience or a Galaxy Nexus or Nexus 4 for the phone experience.

Canonical does plan to release Ubuntu hardware in Q1 of next year, starting with a low end phone than followed by a more powerful handset that also does the tablet docking trick. Tablets will follow after that.