In case you weren’t aware, the BlackBerry PlayBook launched without those apps over half an year ago but they are coming – better late than never.

The email client uses a split screen interface with the list of emails on the left, the body of the selected email in the center and a toolbar on the right. This is how email clients work on Android and iOS tablets too and it’s pretty good.

Next up is the Calendar – it looks similar to the email client with a toolbar on the left, a monthly view in the center and at the right a daily view of the highlighted date. The monthly view makes the numbers bigger for busy days to make them stand out.

The Contacts app is based on Gist, a popular app in for BlackBerries. It has been reworked to fit more info on the PlayBook’s bigger screen (relative to phones). 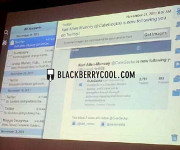 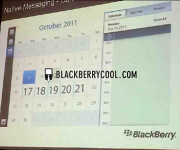 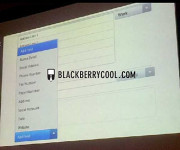 You can expect the email, Calendar and Contacts app on February 17 2012. Yep, those apps that RIM showcased at the BlackBerry Innovation Forum are still a work in progress.

Also in early 2012, you can expect a keyboard accessory for the BlackBerry PlayBook. What’s on currently on the schedule is a BBM app for the PlayBook – a pity since it’s a very popular service among BB users.