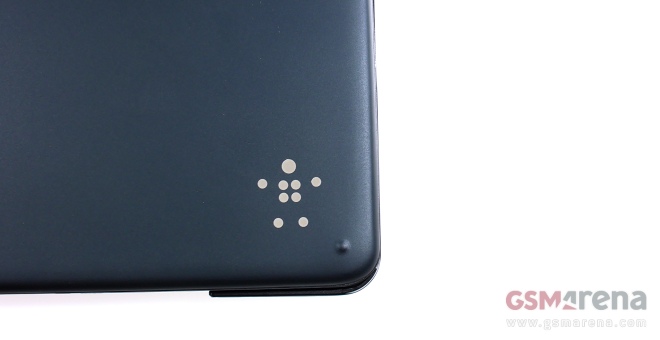 Founded in 1983 in a garage in Southern California, Belkin is one of the largest designers and manufacturers of mobile accessories globally. Read on to find out how the Los Angeles based-company’s top-end iPad accessory fares on a daily basis!

A quick look at the Belkin QODE Ultimate Keyboard Case leaves no doubt about the its serious business intentions. Available in color schemes which closely follow those of the iPad Air, the cover is a good match to the slate visually.

All the above said, the Belkin offering looks great in the flesh. Its design and finish mesh really well with the iPad Air’s premium aura.

Build quality is great. The iPad Air enclosure is made from polycarbonate and faux leather. The latter also doubles as a hinge for the case. The keyboard itself is made of aluminum with matte finish. Its keys are finished in high-quality plastic.

As far as keeping your iPad Air safe and sound goes, the Belkin QODE Ultimate Keyboard Case is up to the task. The tablet and all its edges are fully enclosed, so it is certain to survive accidental scratches and drops. The closing mechanism consists of two powerful neodymium magnets, so it is extremely unlikely to open accidentally.

Users however, should be still be mindful when handling their iPad Air with the case on. Heavy drops could result in damage to the keyboard cover itself.

The Belkin QODE Ultimate Keyboard Case fulfills can be used in tablet-only or keyboard mode, so its ergonomics have two dimensions. In the case of both, the cover offers easy access to its buttons and ports.

In keyboard mode, the cover is one of the most capable around. It offers well-spaced keys which offer great tactile feedback, and require practically no time to get used to. Shortcuts for the most commonly used iPad functions are available too.

The case transforms the iPad into a serious productivity tool

The viewing angle of the iPad can be adjusted in three different positions in keyboard mode. Each of them uses a magnet which activates the keyboard – it won’t work unless attached to the magnets. Having so many viewing options is helpful when gobbling up multimedia content, as well as typing.

In tablet-only mode, the keyboard folds neatly below the iPad Air, thus allowing for easy one-handed use. It must be noted however, that because of the keyboard and the battery on board, the cover is heavier than the dedicated tablet-only cases. This shouldn’t be an issue though, as the full QWERTY is the main reason why anyone will be interested in the Belkin QODE Ultimate Keyboard Case.

The cover in tablet-only mode

The battery life of the cover is impressive. Belkin claim that after a full charge, the battery can power up the tablet for up to 264 hours and sit in standby for up to 4,300 hours (six months). In real life terms, the battery performed up to the expectations – I literally forgot when I charged it.

Charging takes place via microUSB port. There is a cable supplied in the retail package.

Belkin has been one of the top designers and makers of Apple accessories for quite some time now and the QODE Ultimate Keyboard Case for the iPad Air shows why. The cover is one of the most capable offerings with full QWERTY on board. It is superbly built, good-looking, and, very importantly, works as well as expected. It should therefore, be on the short list of everyone looking for this type of case for their iPad Air.

The Belkin QODE Ultimate Keyboard Case is priced at $129. It is available in the company’s online store over here.