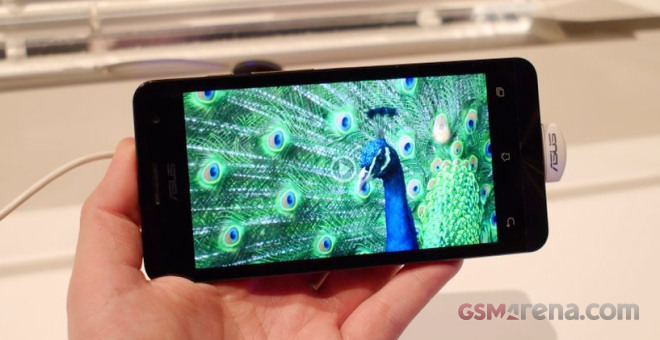 Zenfone 5, just like the other two Zenfones, is a dual-SIM device. The rest of its specs highlights include 4, 8 or 16 GB expandable storage, 8MP Sony BSI rear camera and Android 4.3 Jelly Bean with a KitKat update being in the works already.

The design is of the Asus Zenfone 5 is pretty much the same as the smaller Zenfone 4, it’s just a bit taller and wider and slightly thinner. Its rear is covered with a ceramic coating which is very pleasant to touch and handle.

Zenfone 5′s front is the usual affair – a 2MP front snapper, an earpiece and a couple of sensor above the 5″ display, plus the capacitive Android deck below the screen.

The 8MP camera and its LED flash companion are at the back. The huge loudspeaker grille is also around.

The back of Zenfone 5

There is nothing on the left of the device, while the Power/Lock key and the volume rocker are on the right.

Finally, the 3.5mm audio jack is on top, while the microphone pinhole and the microUSB port are at the bottom of the Zenfone 5.

The 3.5mm audio jack is on top • the microUSB port at the bottom

Asus Zenfone 5 will launch in Black, White, Blue, Red and Gold in the next couple of months starting at $149.