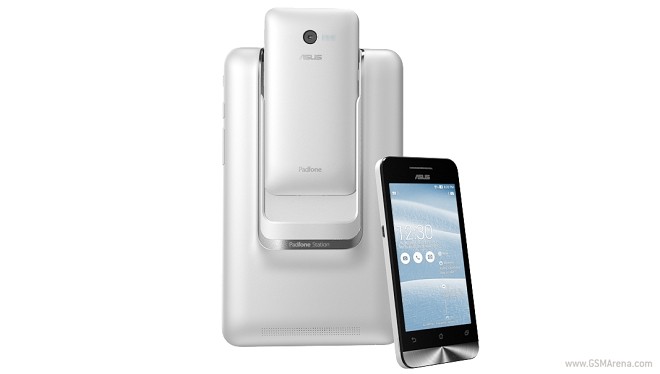 The new ASUS PadFone mini consists of a compact smartphone with 4” WVGA IPS+ display and a docking station with a 7” screen of the same type. The handset is powered by a 1170mAh battery, while the docking station packs a 2100mAh unit.

Connectivity options of the PadFone mini include GSM/GPRS/EDGE and WCDMA/HSPA+/DC-HSPA+. The last one supports download speeds of up to 42Mbps. Bluetooth 4.0 and Wi-Fi 802.11 b/g/n with Wi-Fi Direct are also on board.

The device is relatively compact

Though we have no details available at the moment, the new ASUS PadFone mini will be priced quite competitively. Therefore, it is no surprise that both the handset and its docking station feature a plastic build.

A closer look at the PadFone mini

The above said, both the tablet and its docking station look and feel solid when handled in person. ASUS has a long history of building quality devices and the new PadFone mini is no exception – it is certain to handle plenty of daily use with no hiccups.

We will pass a full verdict on the new ASUS PadFone mini when we get a chance to fully review it. However, at a quick glance and depending on its pricing, the device looks like an appealing AIO budget alternative.