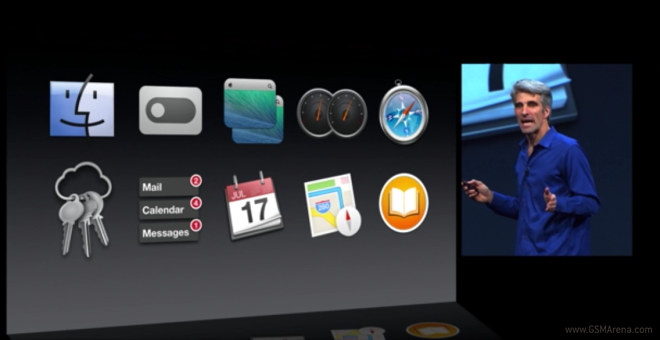 The new version focuses on extending battery life and UI responsiveness. Part of that is moving to OpenGL 4 to optimize graphic drawing, but also other tricks like compressed memory and more. With optimizations Apple promises up to 72% lower CPU usage.

One of the energy saving features is called App Nap – if an app window is completely overlaid by another window (so you can’t see what’s happening), the app will “nap” so it doesn’t waste resources unnecessarily.

Mavericks brings support for multiple displays (woohoo! I guess). One way to add a new display is to use your Apple TV that’s hooked up to your HDTV as a second display. Or you could just plug displays the regular way.

Finder received a new feature – tabs! You can drag a Finder window to another one and you get a tabbed window similar to how web browsers work. Another new feature is tags, which help you organize files – each file can have multiple tags and you can see the list of files with a tag update in real time.

If you have a list of articles to read, the new Reading list feature will let you just scroll continuously through all of them, no clicking. Also, Safari will show a list of links shared by people you follow on Twitter and LinkedIn.

Another cool new feature is iCloud keychain, basically a password manager. Safari will remember and sync the passwords you use and can even suggest a new random password.

There’s more too – Mac OS X Mavericks also features an updated notification system that lets you reply to a message or delete an email, answer a Facetime call straight from the notification. Also, notifications now appear on the lockscreen and iOS notifications will be pushed to your Mac.

Mavericks also updates the Calendar, iBooks (with the full iOS library) and other apps, plus you get Apple Maps on the desktop (with cool 3D views and stuff).

A developer preview of the new OS X Mavericks is available today, the consumer version will drop this Fall.