Angry Birds is a hugely popular game available on just about every mobile platform imaginable, except Windows Phone 7 that is. But now Rovio just confirmed that they are already working on a version of Angry Birds for WP7. 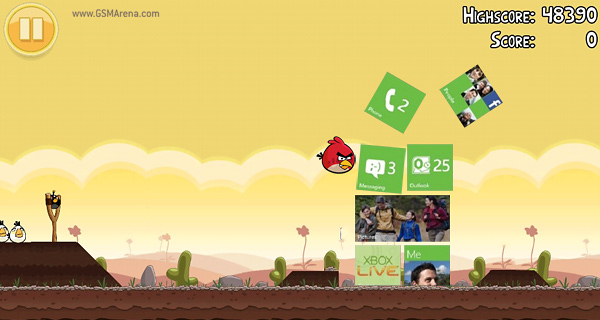 Another big real is that there’s a 3D version of the game in the works, but Rovio was more tight-lipped about that…

An Angry Birds port for Windows Phone 7 has been oddly absent – apparently, Microsoft’s lawyers had something to do with that. That is about to change as work on the port has started (not long after Nokia and Microsoft partnered up to work on WP7, coincidentally).

A 3D version of the game is another thing to expect, coming to “compatible devices”. Rovio left it at that, but all those new smartphones with powerful 3D hardware seem like an ideal target. We’re assuming it’s a 3D graphics variety they are talking about and not the stereoscopic thing since Peter Vesterbacka is quoted of saying “We’ve built a lot of 3D games before, it’s not like it’s a lot of learning in order to recreate the technology with Angry Birds.”

Interestingly though, Rovio is working on an Angry Birds port for the Nintendo 3DS, which features a glasses-free 3D display, similar to that of the LG Optimus 3D. Will the Optimus 3D get the stereoscopic version of the game too?