Android 4.3 for Nexus 4 caught in the wild, system dump available for download

Android 4.3 cropped up on the Google Play Editions of the Samsung Galaxy S4 and HTC One first but you shouldn’t doubt that the Nexus 4 will get it too. Some already have it – one Jeff Williams apparently bought a Nexus 4 from a Google employee and to his surprise the phone was running Android 4.3 JWR66N, the same build number we saw on the Galaxy S4 GPE. 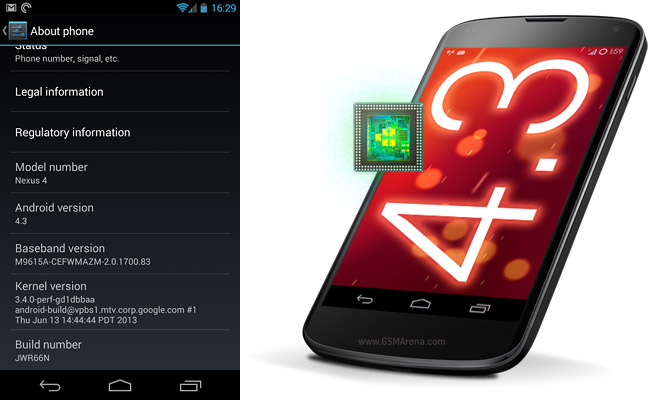 With some help, he managed to get a system dump of the phone. There’s no radio and bootloader yet (Jeff promised to get those soon), but reports say you can use TWRP to restore the dump and get it to work. Proceed with caution (and full backup) as there’s no guarantee of the result.

Or you can wait – the official unveiling will be in less than a week, the even is scheduled for July 24. The delivery of the update for the Nexus 4 shouldn’t take too long after that.

You can grab the dump from here (339MB). If that’s not working, Android Police has set up a number of mirrors you can try.

In the meantime, we’ll wait and see if people digging through the system dump find anything that wasn’t on the Samsung Galaxy S4 Google Play Edition, which we reviewed.

So, will the Samsung Galaxy Nexus get 4.3 as well? It’s currently on 4.2 and this is a relatively minor update.