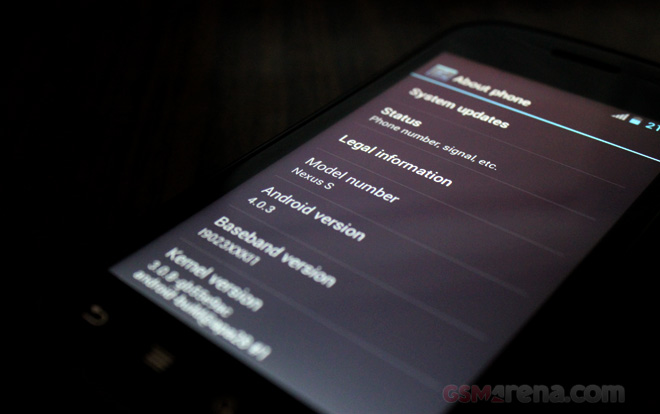 When the time came to release the update for the Nexus S in December, however, Google directly released Android 4.0.3. Google also announced that this will be the new base version of Android 4.0 and OEM’s should start with this version when putting ICS on their devices. However, like the two versions that came before it, 4.0.3 too had several issues. So many, in fact, that Google never released it for the Galaxy Nexus and also pulled down the update that was being sent out to all the Nexus S users.

For the devices that got updated to 4.0.3, however, the damage has been done. With no official way available to roll down the OS to the previous version, the Nexus S users are now stuck with this buggy release. Being an owner of the Nexus S myself, I can testify that while ICS bought several major improvement to the the phone, the particular version that was deployed to our handsets also ruined many things, the chief among which is the battery life. While the phone could previously last a day with Gingerbread now lasts mere hours with regular use. There are other issues as well, such as the vibration feedback of the keys below the display occasionally fading, or the vibration stopping altogether. Then there is also the USB transfer speed, that has dropped from around 5 MB/s to 1.5 MB/s.

But don’t just take my word for it. Head over to this link and you an see other Nexus S users suffering from similar problems. You can see their frustration for yourself as they fail to get a solution or even a response to their problem from Google. As for the Galaxy Nexus, its users have their own share of problems. Not to mention they are running an older version of Android, so they have a couple of features less than even the Nexus S. 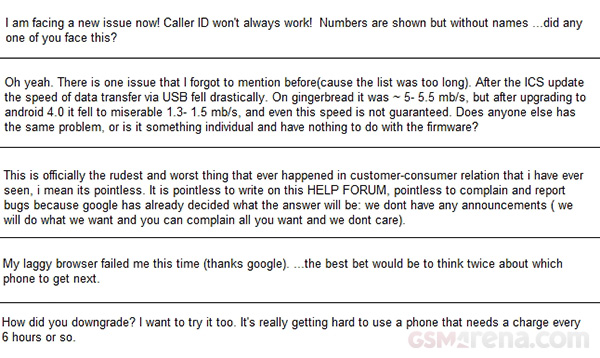 Last month we saw a leaked ROM of the 4.0.4 update for the Verizon Galaxy Nexus, but nothing official has come out ever since. Frankly, I’m getting a bit tired of Google’s silence over the matter. The Nexus devices are supposed to be running the latest and greatest version of Android and are looked at with envy by those who are using phones with an older version of the OS. But when I look at the state of my Nexus S caused by the latest update, I feel I’d rather have Gingerbread back.