‘The Amazing Spider-Man 2′ for iOS and Android game review 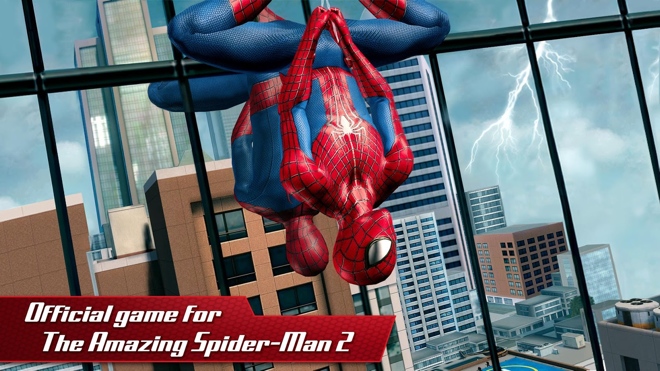 The previous The Amazing Spider-Man game for mobile was mediocre at best (to be honest, the movie wasn’t significantly better). This year, we have a sequel for the movie that promises to be bigger and better than the last one and like clockwork, there is a game that goes along with it. The Amazing Spider-Man 2 game is now out on iOS and Android and we decided to take a look at it, expectations set firmly to ‘Low’.

The Amazing Spider-Man 2 sees the return of our friendly neighborhood Spider-Man, solving crimes and taking out bad guys before bed time. The story of the game is of course based on that of the movie, with a few extra things thrown in for good measure. 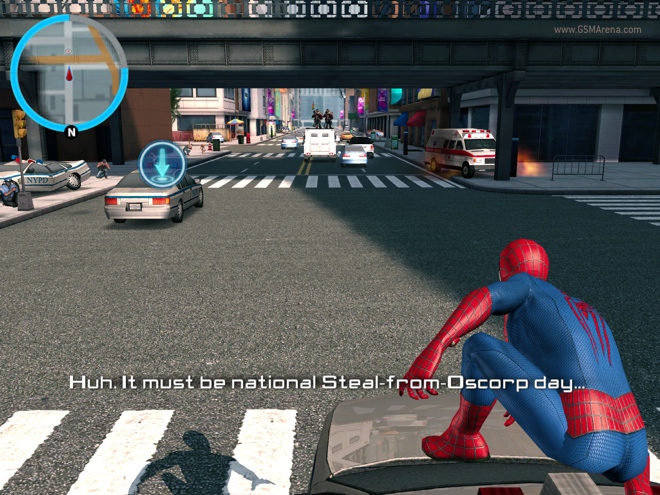 The basic gameplay should be familiar to anyone who’s played the Batman Arkham series on PC or consoles. You enter a mission, which is usually saving someone or solving some crime, and then go to the locations marked on the map. There, you will usually face off against bad guys. The combat is similar to the Batman games, where you just mash one button to relentlessly hit the enemies. There is a button that you push whenever an enemy around you is about to attack (indicated by red markings above him) and you dish out a quick response. There is not a lot here to do other than keep hitting the attack button, which keeps the combat fairly simple and straightforward. Occasionally you will come across some boss fights, which are a combination of hitting the attack button mixed with some quick-time events. Again, fairly simple and straightforward affair. 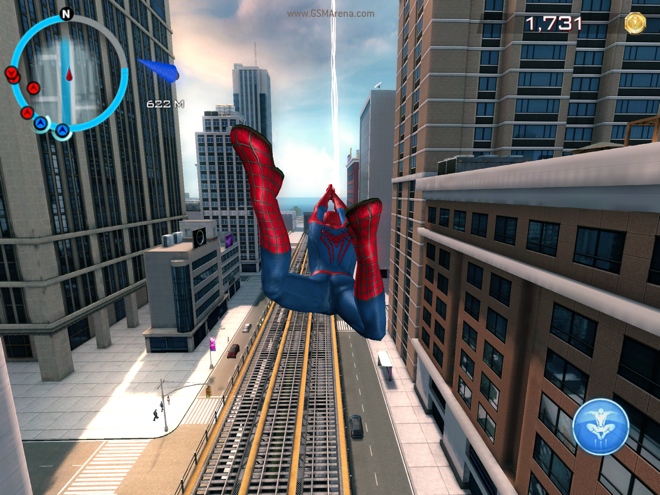 Other than going around punching people, there is also a lot of web slinging to do in this game. This has always been the most fun part of Spider-Man games and that’s the case here as well. It doesn’t really make a lot of sense because you can just release a web mid-air and it will just stick to some invisible object in the sky and let you move around, but it is a lot of fun. Also, since it is Spider-Man we are talking about here, you don’t have to worry about falling because even if you do he lands safely on his feet like a cat. 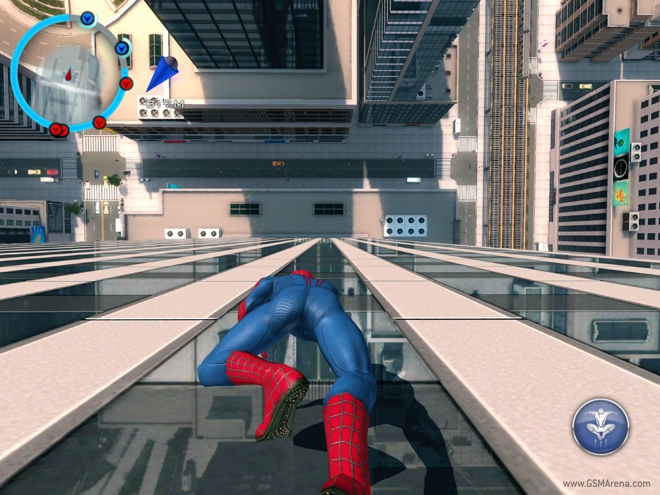 Being Spider-Man also means you can stick to practically any surface. You can literally run up and down vertical surfaces like it’s no big deal or just stick to a wall with your back and admire the view. 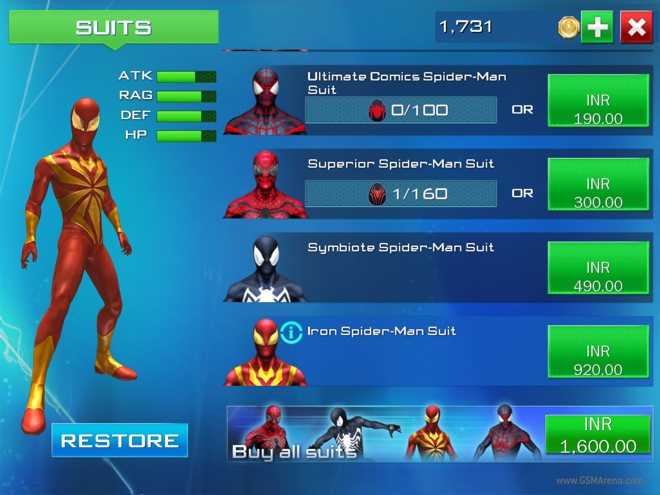 To enhance his abilities, the game offers you these serums that you can use but unfortunately, they all cost in game currency and when you are out of those you have to pay real money. There are also extra suits here to unlock, which cost a LOT of money, more than the game itself, for that matter. As is usual for Gameloft games, there are a lot of IAPs here and they are priced far too high for anyone to take them seriously. 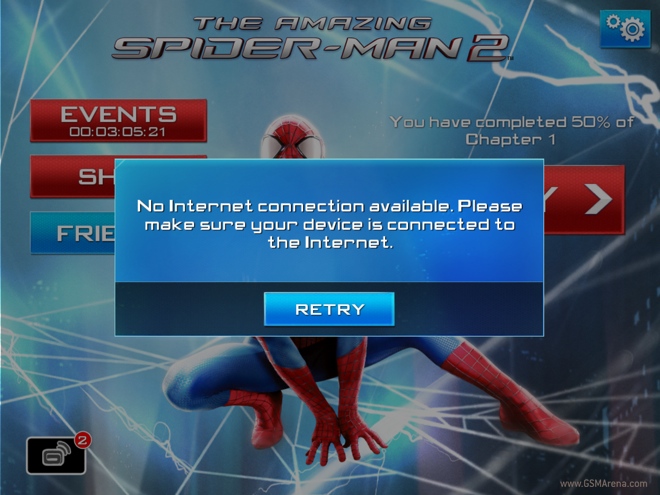 One absurd drawback with the game is that it does not work offline, so you need a constant internet connection to play. If you’re on a device without 3G, such as the iPad or the iPod touch, and out of Wi-Fi range, you can’t even start the game.

The Amazing Spider-Man 2 features some sharp new graphics that are a significant improvement over the previous game. Things such as Spider-Man’s suit and the details in the buildings look great. The city itself is also quite big and there are plenty of places to explore. Only thing letting the visuals down are the spotty textures and some low resolution assets in places and an inconsistent framerate, even on something as powerful as the iPad Air. Other than that, the visuals are pretty good. 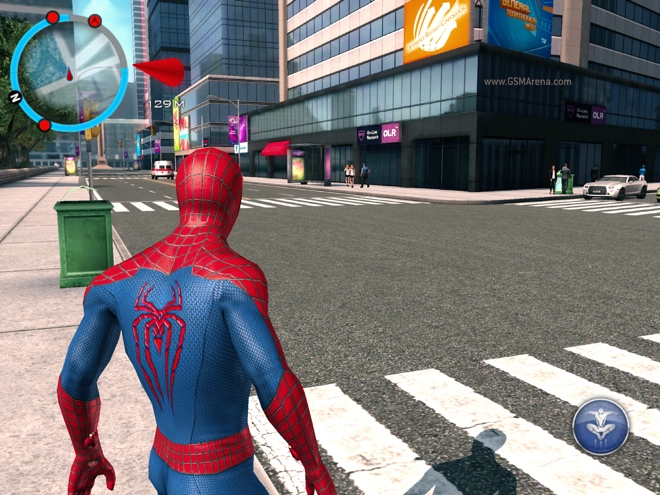 Sound-wise, you have to deal with the game’s less than spectacular voice acting and dialogue. The dialogs are all cheesy and Spider-Man’s wisecracks get tiring very quickly. The voice acting isn’t particularly great, either. Overall, nothing too impressive on the sound front.

The Amazing Spider-Man 2 is a decent game in and of itself, even if you ignore the movie tie-in. There is a good amount of fun to be had here, particularly when you are swinging around the city, which is by far the most entertaining mode of transportation in any game. The rest of the gameplay is adequate, if not equally exciting. The visuals are good but the voice acting and dialogs aren’t. Overall, a decent game for the price but would be a better deal after it goes on sale.