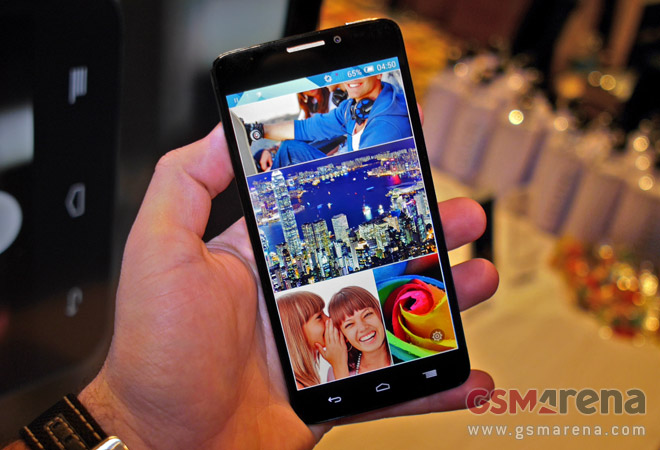 The Idol X+ was previously announced in China, but now Alcatel has brought it worldwide and we couldn’t miss the opportunity to take it for a quick spin.

The phone is built around a 5″ 1080p screen and MediaTek’s octa-core chipset. The screen is sharp with good image quality (Alcatel’s custom UI is very colorful, which underline’s the screen’s quality). It’s covered by Dragontrail glass (a lesser known alternative to Gorilla Glass) with fingerprint-resistant coating.

Alcatel describes the design “borderless, edge-to-edge” and the bezels around the screen are indeed quite small. The device itself is pleasantly thin too, it measures 7.9mm.

The sides of the Alcatel Idol X+

The MediaTek MT6592 chipset packs eight Cortex-A7 cores clocked at 2GHz. A7 isn’t the top CPU core, but we’ve seen it perform splendidly in something like the Moto G (which had half the cores at almost half the clockspeed). 2GB of RAM and PowerVR SGX544 provide a smooth experience, though the Idol X+ runs a slightly outdated OS – Android 4.2.2.

We mentioned the vendor customizations – the good news is that they appear minimal and besides boosting the color palette stay close to Androids flat looks. One interesting change is a custom camera app with live filters and a proprietary spherical panorama option.

Speaking of the camera, it’s a 13MP shooter that can record 1080p video. There’s a 2.1MP front-facing camera too. There’s 16GB of built-in storage, expandable with microSD card slots. The phone is powered by a 2,500mAh.

One place where Alcatel attempts to differentiate the One Touch Idol X+ is audio – SACD 24bit/192kHz audio playback is supported. The sound tech in the Idol X+ was co-developed with JBL, which will also be providing the headset for the phone. Unfortunately, the CES grounds are much too loud to test how well it sounds.

The speakers and microUSB port on the bottom

Anyway, the phone packs 3G HSPA connectivity (it’s targeted at countries where LTE isn’t available yet). Some versions of the Idol X+ will have dual-SIM connectivity too.