Alcatel at IFA 2013: hands-on with the One Touch Idol Alpha, Idol S and Idol Mini

Alcatel brought out a trio of thin and light Android smartphones in the Idol line. The Alcatel One Touch Idol Alpha is the aluminum-clad leader of three with unibody design and attractive transparent elements for design and notification purposes. Then the Idol S follows close behind with a 4.7″ 720p screen dual and 8MP / 1080p camera. The Idol Mini brings up the rear with a thin and light design – 7.4mm thick, 96g – and a dual-SIM option. 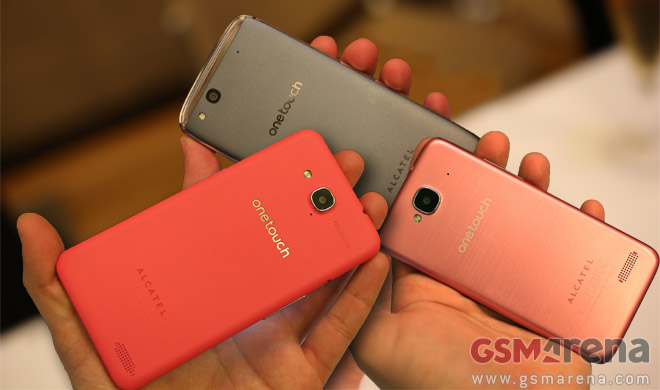 Our hands-on impressions of the three follow after the break.

Alcatel has created a premium phone with the Alpha – the phone has a curved aluminum unibody, it’s just 7.5mm thick and features distinctive transparent elements on the top and bottom.

The phone really feels great in the hand – the curved aluminum of the back is reminiscent of the HTC One, though it’s not really the same. Still, coming from Alcatel this is good stuff – the One Touch Idol Alpha won’t come close to the HTC’s pricing (though Alcatel was mum on how much exactly it would cost).

The curved aluminum back of the One Touch Idol Alpha

The transparent elements on the top and bottom give the Idol Alpha a very Xperia feel as the bottom strip is lit up by three LEDs, which work as a notification light. Unfortunately, Alcatel didn’t learn the Xperia SL lesson and put the button icons on the transparent strip and the actual buttons above it, this takes some getting used to. Also, we wish the top strip was illuminated too.

Anyway, the phone packs a pretty nice looking 4.7″ IPS LCD screen with 720p resolution for a good 312ppi pixel density. The screen is protected by Dragon Trail glass (a lesser known Gorilla Glass competitor used on the back of the Sony Xperia Z) with oleophobic coating. Viewing angles are very wide and colors are quite punchy.

The Alcatel One Touch Idol Alpha has a 4.7″ IPS LCD screen with 720p resolution

The back holds the main camera, LED flash, noise-cancellation mic and the loudspeaker grill. Unfortunately, Alcatel didn’t give out any information on the camera specs.

The sides of the Alcatel One Touch Idol Alpha feels very iPhone-ish with the strip that runs all along the sides of the device (even on top of the transparent strips). The sides hold the pretty flush volume rocker and power key, the microSIM slot (you’ll need an ejector tool for this one) and the microUSB port.

The sides look a lot like those of an iPhone

The phone is powered by an Alcatel-modified Android 4.2.2 Jelly Bean running on a quad-core 1.2GHz processor with 1GB RAM (the company once again skimped on the details). There’s 16GB of built-in storage and no way to expand it, which was a little disappointing.

Another problem is that there’s no 4G connectivity – there’s fast 3G with DC-HSPA+ (42Mbps downlink, 5.76Mbps uplink) but no LTE even though the seemingly lower-end Idol S has it (it has a microSD card slot too).

We quite enjoyed the Alcatel One Touch Idol Alpha (especially the aluminum body and transparent strips). It’s not the most feature packed device out there, but it’s built way better than its standing in the pecking order suggests. It’s great to see the company get out of its comfort zone and if this is priced right, it could be a hit in China (rolling out in early October) and Eastern Europe.

The One Touch Idol S is the middle child of Alcatel’s IFA lineup. It has a 4.7″ 720p screen and compares quite favorably against the Oppo R819, which we quite liked (the Idol S comes only in single-SIM, though).

The OT Idol S is shorter and narrower than the Oppo and only 0.1mm thicker – it measures a fairly impressive 7.4mm thick – and weighs the same at 110g.

The screen is a 4.7″ IPS LCD with 720p resolution and the same 312ppi pixel density. It has Dragon Trail scratch resistant glass with oleophobic coating too. Image quality and viewing angles are good.

There are capacitive Back, Home and Menu keys below the screen and a 1.3MP HD front-facing camera above.

The back is plastic with a nice soft touch finish and comes in Slate, Cherry Red and Fresh Rose. It’s home to the 8MP camera that sticks out of the back, its LED flash, a noise-cancellation mic and the loudspeaker grill. The camera can shoot FullHD 1080p video.

The back of the One Touch Idol S holds an 8MP / 1080p camera, LED flash and the loudspeaker

There’s a flap on the right side of the Alcatel One Touch Idol S that covers the microSIM and microSD cards (there’s 4GB of built-in storage, 2GB of that is user available). The power button is just below the card slots, the 3.5mm audio jack is on top, microUSB port and volume rocker are on the right and the main mic is on the bottom.

The phone runs Android 4.2 Jelly Bean that has been modified by Alcatel. It’s powered by a dual-core 1.2GHz processor with 1GB RAM and we have to say we’ve seen smoother phones (the Oppo R819 has a quad-core CPU of the same architecture). On the upside, the phone comes with Gameloft Live, Asphalt7, Wonder Zoo, Kingdom and Lords, Little Big City, and UNO & Friends preinstalled.

The One Touch Idol S is powered by a 2,000mAh battery that Alcatel says will last through 8.5 hours of 3G talk time or 15 hours of music playback.

Alcatel is in on the mini game as well with a 4.3″ phone of its own – the One Touch Idol Mini. Specs won’t set geeks’ hearts on fire, but given Alcatel’s affordable pricing, the Idol Mini has the potential to steal some users away from the Galaxy S4 mini and HTC One mini phones.

The One Touch Idol Mini is a little taller (2.5mm) than the Galaxy S4 mini, but is nearly 5mm shorter than the HTC One mini. It’s also thinner than the both of them at 7.9mm and very light – we don’t see a lot of sub-100g smartphones, but the Mini is one of them at 96g. All this gives it a proper right to call itself a mini.

The Idol Mini follows the same basic design as the Idol S, except things are smaller. The phone has a 4.3″ FWVGA screen (480 x 854) for 228ppi pixel density. It’s an IPS LCD so it has good viewing angles and image quality is nice overall but nothing spectacular. The screen has oleophobic coating to ward off fingerprints. There are three capacitive keys below the display – Back, Home and Menu – and a VGA front-facing camera above.

Along the sides of the phone are one or two microSIM card slots – yes the Alcatel One Touch Idol Mini has a dual-SIM option with dual-standby, a power button (not great positioning) and 3.5mm audio jack, a volume rocker and microUSB port plus mic pinhole.

The back of the phone has a nice brushed metal finish to it and comes in Silver, Slate or Cranberry Pink. It holds a 5MP camera that protrudes quite a bit from the back. The camera has an LED flash and can record 720p video. The loudspeaker is also here.

The Idol Mini runs Android 4.2 Jelly Bean with Alcatel tweaks, powered by a dual-core 1.3GHz processor and 512MB RAM. As you can imagine it’s not the smoothest phone around, but then again the Samsung Galaxy Core that is a direct competitor of this phone isn’t any more powerful.