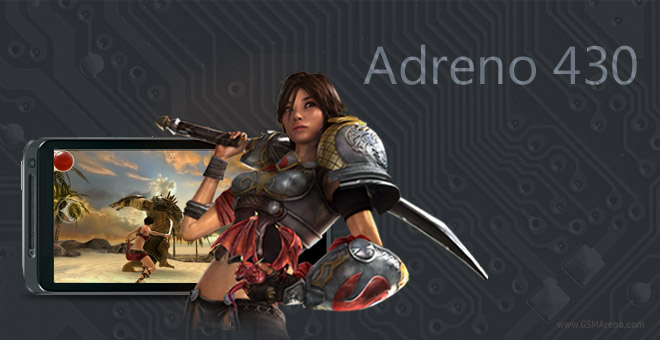 After all, it’s based on ARM’s CPU cores not a Qualcomm custom design. Well, the GPU is a custom design and GFX Bench gives us a taste of what it is capable of.

Adreno 430 promises a 30% performance boost over the Adreno 420 that’s currently found in the Snapdragon 805, which was the last hurrah of Krait and also the chipset of choice for late 2014 flagships.

The test was run on a development board, so we’ll just use the off-screen numbers to measure normalized performance.

Going by these numbers the new Adreno 430 and the Snapdragon 810 chipsets will be in have a slight performance advantage over the PowerVR GX6450 that Apple uses for its iPhone 6 Plus. Nvidia’s Tegra offers unmatched performance but no one has managed to fit it into a smartphone yet (due to power and thermal constraints).

The difference between Adreno 430 and 420 varies by the test as it will between different game engines and goes from a solid 10fps difference to about 3fps. Still, most people with a 2014 flagship got it early and are a generation behind with the Adreno 330 and the improvement there is massive.