You’ve all played the so-called 3D games, you’ve all seen 3D animation, but 3D films are a different animal all together. The FPS games and movies are “3D” in the sense that they are set in a three dimensional world. In addition to moving left or right, forward and back, there’s the third degree of motion – moving up and down.

But regardless of the number of directions you can move in, the image is still displayed on a flat surface, be it the computer monitor or the cinema screen. The problem here is that there no real perception of depth. Sure, you can tell how far things are thanks to perspective but that’s about it, depth is just an illusion.

Enter 3D movies, where you perceive “depth” just like you would in the real world. Normally each eye gets a slightly modified image of the natural setting around us due to the physical distance between them. The brain compbines the two images and presto – there’s real depth. It’s what our minds call 3D. And it’s what we’re after in this post – a small venture inside the 3D technology for home use.

The simplest and most recognizable method of doing this false 3D is with the infamous anaglyph glasses. “Anaglyph glasses” are glasses that have a set of two differently colored spectacles, typically being cyan and red. In that case the two eyes get their different views from the special coloring of the 3D image. It changes when looked through differently colored filters. Here’s a pair of anaglyph glasses and a sample image to give you an idea of what this “special coloring” looks like when looked with bare eyes: 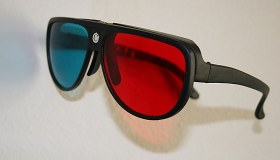 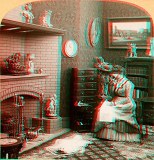 The 3D glasses most people are familiar with

The key advantage of using Anaglyph glasses is that they work on every display and they are cheap – the frame of the anaglyph glasses can be made out of cardboard, while the spectacles themselves can be simple plastic filters. They don’t provide the best image quality, but color reproduction has improved in recent times. But still, this method is dirt cheap on the user side of things – you can get several pairs of glasses for a dollar. So anaglyph glasses easily grab our award for the best value entry-level 3D “equipment”. Here, you can check out a bunch of 3D videos in YouTube. Just make sure you snatch a pair of anaglyph glasses off Ebay.

Plus it’s not only videos you can watch, you can also put your glasses to use for real 3D gaming as long as your computer has a recent NVIDIA GPU (here’s the list of requirements) and you use NVIDIA’s 3D Vision Discover software for 3D visualization. Thanks to that NVIDIA technology you can play 3D games (they claim to support more than 350 titles), you can watch 3D movies and browse photos in 3D. The key feature here is that works on any CRT or LCD monitor – most other 3D methods don’t. So here’s another one vote for anaglyph glasses. You simply have no excuse to not give them a try this holiday season.

3D Vision Discover – the software we mentioned in the previous paragraph, is just to get you hooked. The real 3D home treat by NVIDIA is called… 3D Vision – yeah, we know, how resourceful! Anyways, 3D Vision makes use of a pair of special “LCD shutter glasses”. But don’t be misled by their name – they don’t have tiny LCD screens embedded. 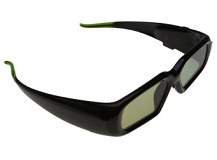 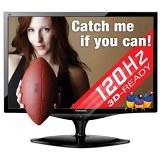 The glasses “talk” to the computer over an IR transmitter, which is plugged into a USB port. This IR connection is used for sychnronization so that the glasses can “cover” each eye just in the right time.

The advantage of NVIDIA 3D Vision glasses (199 US dollars for the glasses and IR receiver and 149 dollars for an extra pair of glasses) is that they use clear spectacles for each eye without any color tint so they don’t influence the monitor’s color reproduction or viewing angles. But the problem is that the computer has to output double the required framerate.

If a game is to be played at 60Hz, then the display needs to work on 120Hz (60Hz times two eyes). And LCDs in general can’t do that – but of course there are “3D-ready” computer monitors and even TV sets. Unfortunately, you would have to pay an extra for a 3D-ready monitor and the choice is pretty limited right now. You should know however that those 120Hz monitors are just fine even when not used in 3D modes. Two examples of such monitors include Samsung SyncMaster 2233RZ and ViewSonic VX2265wm.

Passive polarized glasses work only with a special polarizing monitor

Polarized glasses are used in the next method of getting digital 3D in your home. The polarized glasses in question are much like the ones they typically use in modern 3D cinema. Each of the spectacles on the glasses passes through only light that’s polarized in a special way. The way they do it in the cinema is with two separate projectors, each beaming light with different polarization. With the glasses on, each of your eyes gets only the image from one of the projectors. Without the glasses, the picture appears blurred because you see the images from both projectors overlapping. It’s that simple. But how do you go about implementing the same system in the comfort of your home.

Well, a possible solution is by using a special monitor, which does the dual polarizing of light much like those projectors in the cinema. You might be surprised to know that getting such a monitor can be even less expensive than its 120Hz peers we showed you in the previous chapter. Zalman for example have their Zalman ZM-M220W polarizing monitor. 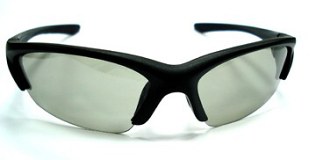 Here’s how it works – the image on the display is composed of multiple rows or pixels, right? Well, the odd numbered rows are polarized one way, the even numbered ones the other way. In 3D mode each one of your eyes sees only half of the rows and as your brain merges them together, the resulting 3D imagery has only half the vertical resolution (525 pixels instead of the original 1050).

The monitor also works in 2D mode but as it seems the filter over the display isn’t perfect and in 2D mode there are visible horizontal lines, which makes it unsuitable for use as a primary monitor for 2D use.

Another solution based on the same stereoscopic trick comes from iZ3D. Now they have a monitor that uses two separate matrices – the first is an ordinary LCD matrix, which produces the image (a combination of the images for each eye) and the second uses magic (or rather complicated physics) to change the polarization of the light for the underlying LCD matrix. 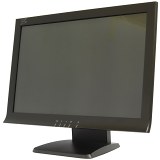 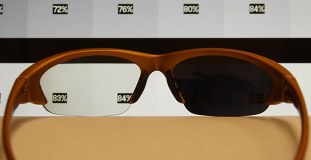 The difference here is that the second matrix is able to change polarization on pixel level, which means no loss in resolution. The advantage is even bigger – in 2D mode, the second matrix looks like gray transparent panel on top of the regular one, so it’s actually fit for use as a main monitor. It’s not perfect though, because the combination of two images in 3D mode results in visible artifacts. This Xbit labs review has all the details and more info on how the magic works.

Lenticular displays don’t need any glasses at all

Another type of 3D display is the so-called lenticular screen. The best part about it is that it works without glasses. They achieve this by using tiny lenses on screen, which direct the light at different angles – some lenses direct it to your left eye, others to the right.

The problem with this is that you need to be in a specific spot, the sweet spot, in order to experience the 3D effect. Some screens allow several people to enjoy 3D at the same time by having several sweet spots. The disadvantage of lenticular displays is that the maximum number of viewers is still fixed and that all viewers have to stay put on one place.

Some lenticluar screens even have a fix for adding another layer of three-dimensionality. They allow for the so-called “look around” effect. What look-around means is that you see different 3D views as you move from side to side, seeing different aspects of the 3D object or scene. 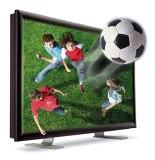 Lenticular screens look like normal screens – until you turn them on!

In lenticluar screens the color accuracy doesn’t suffer from the use of the added lenses, but since the image is split in two vertically (similarly to how the polarizing displays work) the horizontal resolution is reduced in half. With the “look around” enabled, the drop in resolution is even higher and since more than two versions of the image are produced (one for each possible viewing angle), the computational requirements are very high, making 3D games almost impossible to run in real time with the currently available consumer computer systems.

An example of a lenticular screen is the Wazabee 3Dee (review) or Philips TVs like the
Philips 42-3D6W02 (PDF leaflet), which runs around 9000 US dollars.

With most 3D displays your viewport is fixed – even if you move around, the picture doesn’t change. Some technologies offer to give you the ability to look around – the lenticular display from the previous section for example.

Another way to do it, regardless of which method is used to separate the images for each eye, is to use a web cam to track the viewer’s head and eyes and adjust the picture accordingly. The current solutions (like this one), so far work for only one viewer, but the technology to track multiple faces is getting better and better and with the multiple viewports of lenticular screens, several people might be able to enjoy the kick ass 3D very soon.

Yet another option, is the so called “Virtual Reality” glasses, or VR-glasses. These are more officially known as Head-mounted displays, which is a dead giveaway of how they work. 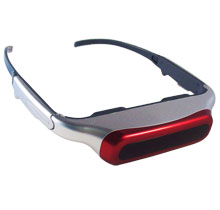 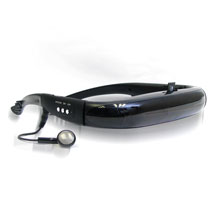 VR glasses would make you look cool in the 80s

There are no light-splitting tricks here, just two separate screens, one for each eye. Their drawback however is that they are quite pricey (around 400 US dollars) and you run the risk of looking like something that jumped out of an 80s sci-fi movie. But seriously, most models use low-resolution screens, which spoils the whole experience.

And finally a quick comparison for further reference

We’ll try to organize the pros and cons (and price) of each method in a more easy to read table:

This post got quite long but we tried to pack in as much information as we could find and cover all of the numerous 3D display technologies. We hope we’ve managed to get you interested and we enourage you to do some research yourself. 3D displays are already quite accessible and will only get cheaper. The HDMI standard already has support for 3D content (since version 1.4), so it’s only a matter of time before you can enjoy 3D TV in your own living room.

Snooker, with it’s many colored balls, was used by the BBC to demonstrate the advantages of color TV. 3D will also need something like that – if the technology is to become a household name, it must deliver more than 3D movies. So, what do you think – what game can be the Snooker of 3D TV? Quidditch you say? Well…